Fake Monks prey on the unknowing

In Bangkok Thailand in parts of the city frequented by tourists and other non Buddhists, there are fake monks seeking money. This has the effect of putting a bad name on Buddhism, and pissing off the Thais. 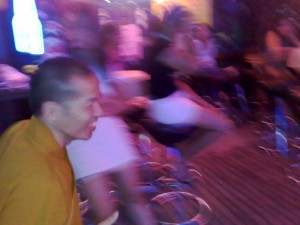 These fake Monks have been reported on in a few non Thai nightlife columns based in Bangkok, and they don’t have kind words for these imposters. It seems the fake monks are only targeting foreigners who may not know they are fake. Essentially this is just a huge scam making people think they are making a religious contribution when in fact it is just beer money for the fake Monk. They walk around with a cup with money in it of mid size denomination suggesting that is the proper amount to donate. That amount is roughly half the Minimum daily wage in Bangkok.

Real Monks are forbidden to ask for money and they only time they are out and about seeking alms are at first light of day. They are given food by the Thais. Real Monks are never out at night. Also real Monks are often barefoot or wearing sandals, One of the fake Monks has been given the nickname in the nightlife columns as the ‘Nike Monk’ as he has been seen wearing Nike sneakers on several occasions in and around the nightlife venues at night.

Khao Phansa Buddhist lent starts July 18 and real monks stay in their temples except for possibly alms in the early morning hours. This period of lent lasts 3 months so anyone out dressed as a monk other than early morning hours is more than likely a fake.

The Thais are devoutly religious and you can see it every place you go as there are Buddhist shrines everywhere you look, and some are of more importance than others.

A few years back a deranged person took a hammer to one of the more important shrines in downtown Bangkok in the early morning hours. The result of that he was chased down and beaten to death by some street sweepers a few minutes later. So the fake Monks are taking a huge risk of bodily harm if they step over that line that they are dancing on.

Thailand has Lèse majesté laws and as the King is a Buddhist, these fake monks risk being charged with that as they are degrading Buddhism and Buddhists simply by being out pretending to be a Monk.

The Thais are kind and loving people, and these fake Monks simply do damage to everyone associated with Buddhism.

📂This entry was posted in Scams And Shams Thailand