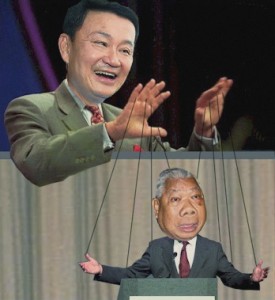 Laws in many countries are clear about knowingly assisting a fugitive. If you help them, you can expect to explain to a judge why. In actuality the proper thing to do is assist the authorities any way you can in apprehending the fugitive. Once a fugitive is no longer a fugitive and in custody, you are more than welcome to assist them in their legal defense.

To set the stage, Prime Minister Samak Sundaravej made a statement (outlined below) that may get him in trouble. This may be simply one of those things that is not thought out past the first or second step. Taking it past the first few steps and it becomes clear that it very possibly will come around to bite him in the ass. That will probably result in Samak wanting another part of the Constitution changed too if it is covered by the Constitution.

Prime Minister Samak Sundaravej told a People Power Party (PPP) meeting on August 19 he shared Party MPs’ sympathy for former premier Thaksin Shinawatra, who was put on the police’s wanted list – along with his wife Pojaman – after they skipped bail.

Samak told his colleagues he had always protected Thaksin and would never stab him in the back or try to damage his reputation, a party source revealed.

“I will speak here [about the matter] for the last time. I want to ask for your understanding that I am working for the benefit of the country and for our former prime minister,” he was quoted saying.

“My party colleagues want me to explain to the party and I’m ready to talk to everyone. If you see that I can no longer do anything to help the former prime minister, I will do whatever you like. And I will consider my political future,” Samak reportedly said.

Samak spent about 20 minutes addressing the meeting. After, some MPs including Wasit Payakabutr raised their hands to ask questions. However, Samak excused himself and left the meeting room immediately.

Samak’s remarks came in response to a written request by some 200 party MPs and candidates upset by police issuing wanted notices for Thaksin and Pojaman and distributing them to stations throughout the country, according to PPP spokesman Kuthep Saikrachang.

The Supreme Court’s Criminal Division for Political Office Holders earlier issued arrest warrants for the couple after they failed to show up in court last week for a hearing in a corruption case involving the Ratchadaphisek land deal.

PPP deputy leader Somchai Wongsawat, who is Thaksin’s brother-in-law, mediated at yesterday’s meeting between Samak and party members. Copies of the letter sent to Samak were distributed to participants yesterday.

When Samak arrived, he complained about the heavy presence of reporters and cameramen. MP Wasit, who is close to Thaksin’s politician sister Yaowapa Wongsawat, was heard saying: “They just want to photograph someone who rarely attends party meetings.”

Most of the participants looked stunned at Wasit’s comment, the source said.

Before the meeting, Yaowapa yesterday called on Samak to protect Thaksin’s dignity and honour, as a former national leader.

Yaowapa, who holds no official executive post in the ruling People Power Party, still has good connections with many of its MPs, who come from the disbanded Thai Rak Thai Party, in which Yaowapa served as an executive.

Before the meeting, she met with many People Power MPs who are still loyal to Thaksin, PPP’s Suthin said.

Yaowapa said the politicians were not pressuring the PM but simply acted on concerns by people in their electorates.

“People were really upset when an arrest warrant was issued for Thaksin. They asked the MPs, who simply relayed this concern to the party leader,” Suthin quoted Yaowapa.

“The MPs just want to ask the party leader to protect Thaksin’s human dignity and his status as a former prime minister – it is not for Thaksin himself,” she was quoted saying.

Thaksin’s sister said he did not deserve such “humiliating” treatment from the police, as there had been no court ruling condemning him.

So needless to say Thaksin has already done a good job at disrespecting and pissing off the courts with his now famous fax to the media. In Thailand it is very disrespectful do make someone lose face. In grand Thaksin style Thaksin put dirt on the face of the court by accusing them of being tainted. The ‘In your face’ pictures of Thaksin and family shopping hours after arriving in London were the icing on the cake as they cover all cultures in showing disrespect to the Thai court. So needless to say the court will not look kindly on anyone assisting Thaksin to escape justice.

The courts have seen to it that 3 of Thaksin’s lawyers are in jail for attempting to bribe the court. Now if Samak steps up to the plate and does anything more than give a speech, he will be going against the court and could face jail. In fact to even criticize the court may be stepping over the line as the court has jailed others who publically challenged the court’s decisions. So just to speak out may be contempt of court as the courts have the final say.

The courts have followed procedure and issued arrest warrants for the fugitives Thaksin and his wife. The police following the courts instruction circulated the arrest warrants. The warrants are public documents and not private, and not subject to any special treatment. If the police saw fit to publicize the warrants to bring the fugitives to justice, then they can and should do so.

In America you can find wanted posters in the post office, and for very high profile cases the popular TV program “America’s Most Wanted” is on weekly and profiles several fugitives during each airing.

If members of the PPP and Thaksin’s family are upset with the handling of Thaksin, then they may want to consider explaining it to the judge and not pick on Samak. The bottom line is Thaksin is on his own when it comes to getting help from people inside Thailand, and that includes family. Even the distortion from Thaksin’s sister saying ‘there had been no court ruling condemning him.’ is wrong. Thaksin is guilty of failure to appear.

Thaksin lost a lot more than his bail money when he went on the run.

One Response to Assisting Thaksin may mean jail