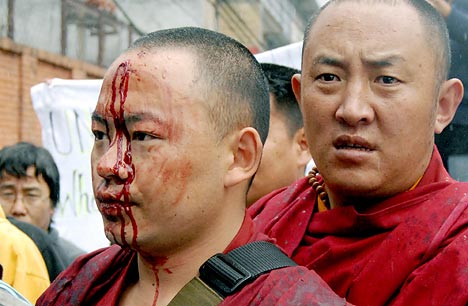 Once the Olympic spotlight is turned off in China, there is every indication that China’s self imposed temporary restraint will end. China did what can only be described as ingesting poison during the Olympic games. In the eyes of China freedom of speech is seen as poison, and there were more than subtle hints in the media China was very uncomfortable swinging to be as open as it was during the last 3 or 4 weeks. Now that time is ending and what can be expected is the pendulum swinging the other way, and that means arrests and more.

Not wanting to go into speculation, but every indicator says that those who dared now must face the music. It seems what was predicted in “Olympic eggshells” is about to come true. The United States Ambassador to China pressed China to release 8 Americans who were protesting Tibet, and that release came Sunday with them being deported. Needless to say the United States Ambassador is probably one of many in line with the same task.

Areas that were designated as protest sites for the people who dared, were not used. The reason is simple, you needed a permit to protest, and when you applied for the permit you were either arrested on the spot or watched to see who you associated with. No doubt their arrest will come in the next few days along with their associates.

The Earthquake in China distracted the worlds attention from whatever they were looking at before. Unfortunately unless things are kept on the front page we humans have a short attention span. The problems in Burma are still there but for the most part we have forgotten. Even the China earthquake seems to have faded from memory. How quickly we forget the roughly 200,000 live that were lost and the countless thousands forced to endure the physical and psychological aftermath of those two events. Take a moment to track backwards in your mind major events that captured the world’s attention and you will find The Olympic torch political issue that was sparked by the Tibet issue, and you will see our attention span is about one month. On the bright side it is far better that the 10 second attention span of a gold fish.

Unfortunately as per usual, there will be little coverage in China and what does come out will have little to do with the truth if presented in the state run media. Only the underground news will get out and China’s great firewall attempts to hinder that too. But by the time October rolls around Americans will be focused on elections, Europe will be into the autumn festivals, and Ramadan will be just ending for the Muslim faith.

The fear of replanting the seeds of democracy, freedom of religion, freedom of speech is the nightmare of China’s government. Only they can describe the horrors in their nightmares in what others very simply call their dreams.