Trouble in Thailand over one man 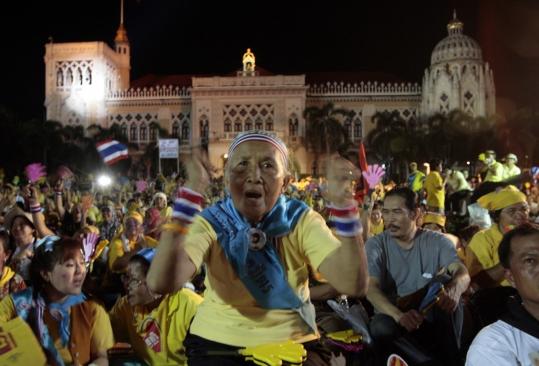 Roughly for the past 4 years all the political trouble in Thailand has been over one man. That man is Thaksin Shinawatra who is now a fugitive hiding in the United Kingdom seeking to convince the British Government to grant him political asylum. Hopefully they will consider carefully what they will invite to live with them.

All the clashes between People’s Alliance for Democracy (PAD) and the People Power Party (PPP) are as a result of Thaksin. Simply Thaksin refuses to give up even in the light of being a fugitive. Thaksin no doubt sees that the trial he fled is being conducted fairly and because of that he suspects a conviction. The hearing phase of Thaksin’s trial is over and the judges are now deciding Thaksin’s fate and due to rule September 17.

The high courts in Thailand have been the shining star of justice ever since the judges held an audience with the King around the start of 2007. Even the most critical observers and critics from around the world are silent and in this case silence is golden. Simply put, Thailand’s high courts are now setting the new standard in Asia to be on par with the courts in the west. To that effect the only appropriate response is applauding them. However the lower courts are still somewhat corrupt but that is another story for another day.

The fact that Thaksin refuses to give up is ego driven. He simply can’t stand to be anything other than number one. In Asia underhanded methods are often used to achieve ones goals. Thaksin was no stranger to those tactics. Even the fact that he has been banned from politics until June 2012, he still persists. He very clearly is the controlling force behind the PPP. This is also something the British Government must consider, to grant political asylum to Thaksin who is still in the game with significant influence. One would think that political asylum is for someone out of the game and who needs to flee from opponents who show signs of not being fair or unjust penalties.

That most certainly is not the case in Thailand. Thaksin just wants an edge to be out of reach of Thai justice while he still continues to manipulate things in Thailand. If that is indeed Thaksin’s intent, then the by the British Government granting political asylum to Thaksin, they could become an accessory to a crime or many crimes depending on what Thaksin does. Thaksin is notorious for using people, and if he can some how manipulate the British government into helping him, that becomes one huge dance with the devil. That most certainly will tarnish that British Sterling shine that the British are so proud of, as nobody comes out undamaged in some way when dealing with Thaksin.

The fact that blood will still be spilled in Thailand over Thaksin is just a complete shame. The unrest in Thailand will continue until Thaksin is out of the picture completely. If he is granted political asylum anyplace in the world, Thailand will still suffer. If Thaksin is unwilling to back down and give up, then someone must step in and do that for him. The Thai courts look to be on that track, and all that needs to be done is deliver Thaksin back to the Thais.

Allowing Thaksin to persist from abroad is the rough equal to ending all security measures meant to keep terrorists at bay. People will ultimately get hurt in either scenario. The hope that the British Government sees things this way too is the hope on many Thai minds who want to see peace in their country.

3 Responses to Trouble in Thailand over one man