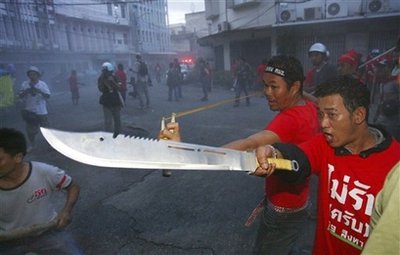 In a classic Thaksin Shinawatra signature move by Thaksin supporters, Thai blood has been spilled in Bangkok. The reason was to provide a reason for an emergency decree to be declared by Thailand’s Thaksin supporting Prime Minister. In clearly orchestrate events over the last few days leading to the spilling of Thai Blood, Thaksin has taken remote control of all of Bangkok through his puppet Prime Minister.

It is important to keep cause and effect in mind and track back to the common point, and that point is the fugitive Thaksin Shinawatra. All the events thus far related to this state of emergency, and events yet to happen can be tracked back to Thaksin. Given a choice between the carrot and the stick, Thaksin prefers the stick.

The sweeping powers the Thai Prime Minister has is also a product of Thaksin. The problems in southern Thailand that were initially caused by Thaksin’s stick approach gave the excuse for the power. Eventually it was decided at Thaksin’s suggestion that sweeping powers be given to the Prime Minister to deal with the problem. Under the emergency decree the Prime Minister has the powers of a dictator, and all branches of government are under his control. If you will recall Thaksin was trying to set up just such an excuse just before the 2006 coup using the exact same method.

Prior to the 2006 coup, there was increasing violence against the People’s Alliance for Democracy (PAD) and other anti Thaksin groups. The same staged events were unfolding then when pro Thaksin people were beating up on innocent people. The coup was staged to stop that escalation. If Thaksin had succeeded in declaring a state of emergency, he would have won the game and been dictator. It was estimated that was only hours away.

Now nearly two years later that event has unfolded, and essentially Thaksin is in control of Thailand while walking the streets of London pretending not to be involved. It is almost certain Thaksin has been burning up the phone lines giving instructions on what to do, and who to screw. The announcement that the State of emergency will be in effect until November 30 gives Thaksin lots of time to do what he wants.

Seeing as all government agencies are now under Thaksin’s control, you can easily imagine what he would like to do to the cases against him. You can also expect a move to put a pro Thaksin man in the head of the Military to insure no coup will be staged. However that move would be like handling a pissed off scorpion at the moment.

For the moment things are shifting in Thaksin’s favor by way of force, however the chances of a coup have also just increased drastically. The next 72 hours will be critical as all sides take a look at the game board to decide what to do next. Whatever Thaksin’s moves will be will decide what the military will do. The one unknown is just how loyal Prime Minister Samak Sundaravej is to Thaksin.

The issue of the PAD at the Government House are of little consequence now. Thaksin has free hand to do what he wants as long as it is gradual and does not trigger a coup. Lets just hope the British government keeps this in mind when it comes to considering Thaksin’s application for asylum.

📂This entry was posted in Politics Thailand United Kingdom