Thailand’s Samak looking to save face 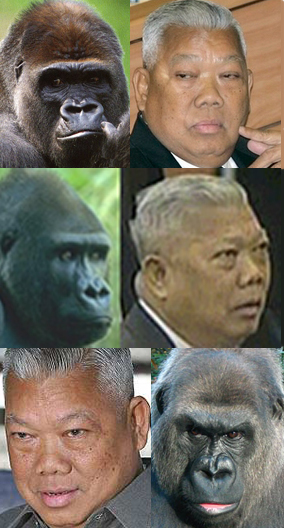 In a series of very Thai statements, Prime Minister Samak Sundaravej is looking to save face. However in the next breath he provides a conflicting statement that he does not plan to change and continue on the same path that caused him to lose face in the first place.

When Connecting the Dots on this there is clearly a “Y” in the road. Down one path it suggests he wants to save face and step down. Down the other path is suggest ‘forgive me for doing this but it’s all your fault and I must continue at all costs.’

Looking a bit deeper at underlying motivations you begin to see something that looks like the inside of your ‘stuff’ draw where everything goes that does not have a home. In Samak’s draw there is panic about pending jail time, rewards from Thaksin, saving face, stubbornness, not caring about others, Pending career ending 5 year ban from politics when the People Power Party (PPP) is dissolved, and acting like a chest thumping animal when confronted with a question he can’t answer.

As for the saving face, Thai culture as with many Asian cultures saving face is important. There have been people that have committed suicide because they lost face and were not able to recover. In Thailand face has tangible value the same as money. To do things that help you gain face you are elevated in society. Losing face the opposite is true. There is apparently some low threshold that Thais will stop giving you an opportunity to save face. A westerner may quickly find that point if they are extremely disrespectful. For a Thai to pass that threshold is a rare event however not impossible. Thaksin Shinawatra managed to go significantly past that point.

Now seeing that Samak is Thaksin’s puppet, and that Thaksin does not care about the people he uses, it appears Thaksin is taking Samak straight to that event horizon.

The first significant face saving remark from Samak during his Sunday broadcast on September 7 was, that the state of emergency was not his sole decision and that the military had a say. However history and facts suggest otherwise. The military was opposed to the order and that is on record from days before, however Samak brought it up at least one time as an option.

The Democratic Alliance Against Dictatorship (DAAD) mob that cause the state of emergency was actually funded from yet fully undisclosed sources, however a direct PPP connection is apparent. They attempted to get 10,000 DAAD supporter together. Seeing that certainly would be a lot of money for a ‘Hire a riot’, and most if not all PPP members lack such disposable funds. This means a direct Thaksin connection is highly likely. Couple that with Samak’s repeated suggestions for a state of emergency, and you can easily guess the topic of the phone calls between Samak and Thaksin. So there is no coincidence why this was a Thaksin style signature event.

So back on topic Samak plans to go to the United Nations in New York to explain to the world what is going on. Once again this is saving face in Samak’s eyes. However to leave the country while all this turmoil is going on will not be received well. Using Samak’s own reasons for not stepping down; To remain working as the prime minister to safeguard democracy and the monarchy institution, conflicts with being in New York. To make that happen it would require the Prime Minister to stay at home during a time of crisis like this, and not run off 12 time zones away to spew severely twisted statements to respectable diplomats from around the world. Seeing as Thaksin has taken the high profile road people tend to be familiar with events. Because of that, Samak faces an uphill battle to convince others at The United Nations to see things from his point of view. To western diplomats as well as most others, they would see it as extremely poor judgment on the part of Samak to run of to visit the United Nations during the crisis in his country.

On the other side of Samak not budging yet, there are not enough dots yet to draw a good picture, however there is a remote suggestion he could be somehow removed from power while away, and that would save Samak’s face. Samak made the point to make the connection it was the exact same trip to the United Nations that Thaksin was on in 2006 when the coup that ousted Thaksin happened. Meanwhile Thailand continues to bleed.

📂This entry was posted in Politics Thailand United States

« Payback is a bitch Change is good »

2 Responses to Thailand’s Samak looking to save face