There is no gravity the world sucks 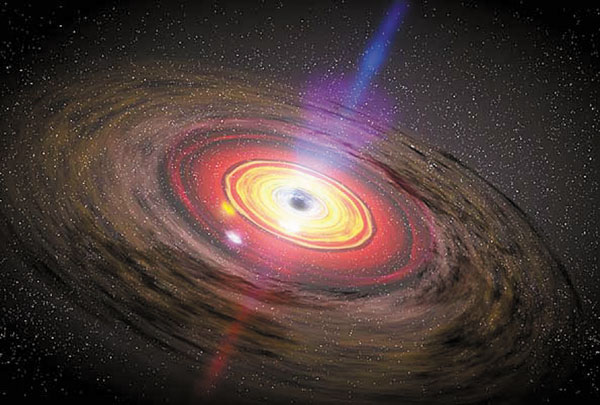 That one line joke may be more than just a joke if the doomsday fears come true of some. Some are predicting the Large Hadron Collider due to go on line September 10 may produce a black hole.

Having a black hole on earth is not a good thing. That is one black dot Connecting the Dots does not want to think about. The thought of having the earth sucked in and compacted to about the size of a basketball is a bit disturbing.

But not to take the pessimist view, there are things we need to know…. or do we? Understanding the big bang and how reproducing it may help us has still yet to be explained to me. The simple fact is that would take a lot of dots to connect to give me an explanation.

I certainly don’t want to stand in the path of science and advancement however building a monster machine and turning in on may be equal to putting a 10 year old behind the wheel of a Top Fuel Dragster that can eat up the quarter mile in 5 seconds. It may be a bit much to handle. The fact that all the computer models for global warming are off is a strong suggestion we do make mistakes when we don’t have a model to work from. What was predicted to happen 30 or more years from now is happening now.

However we march on hoping to improve ourselves and not kill ourselves in the process. So if you suddenly find yourself leaning in the opposite direction of the collider on Wednesday you will know what happened.

The same physical laws apply in distant galaxies as in the lab. Our brains evolved to cope with life on the African savannah, but they can make sense of things far beyond our ancestors’ experience – from subatomic particles, far too small to be imaged by any microscope, to galaxies billions of light years away.

As the centuries have passed, we have progressed remarkably in our understanding of the world around us. We know that the essence of all substances – their color, texture, hardness and so forth – is set by the atoms of which they are made, and by how those atoms are linked together.

We know that in every cell of every living creature, atoms are configured into proteins and tangled strings of DNA. We know, even, that these atoms were all synthesized from pristine hydrogen by processes deep inside stars that died before our solar system came into being. We are literally the ashes of ancient stars – the “nuclear waste” from the fuel that made them shine.

We know, also, what forces acted on those stars, and act on our bodies. Isaac Newton showed that the force that makes apples fall is the same thing that holds the planets in their orbits and that controls the trajectory of spacecraft and satellites.

Michael Faraday achieved a further unification by showing that electric and magnetic forces were linked – an insight that led to electric motors and dynamos, and radio waves.

Nearly 100 years ago, Ernest Rutherford, then working in Manchester, inferred that an atom contained a nucleus, surrounded by a “cloud” of electrons. These developments have led to lasers, nuclear energy and much else.

But there are still gaps in our knowledge. In particular, we still can’t link the forces uncovered by Faraday and Newton to the so-called “nuclear” force that actually holds the nuclei of atoms together – and without this force there would be no carbon, no oxygen and no life.

Nor can we make our theories about the universe work without adopting some very strange assumptions indeed: there seems, for instance, to be a mysterious force, latent in space itself, that is pushing everything apart and speeding up its expansion.

These profound questions can’t be solved just by armchair theorists. In terms of innate brainpower, we’re no wiser than Aristotle was; without successive generations of experiments, we would still believe, like him, in the four elements of earth, air, fire and water.

Science demands experimentation – and some scientific challenges are so great that they demand a massive enterprise, in which thousands of researchers combine their efforts to achieve a common goal.

This happened in astronomy with the Hubble Telescope, and in biology with the human genome project. And now it is happening in physics. The Large Hadron Collider, which will begin operations on Wednesday, will be the largest experiment in human history.

Constructed at a cost of £4.4 billion, shared among all participating nations, it is the latest in a series of successively more powerful particle accelerators that have been built at the CERN laboratory in Geneva.

CERN was set up in 1955 by European scientists who had won the ear of government through their nuclear work during the Second World War, and who recognized that progress in their subject would require equipment too expensive for any single European country to fund. But what started as a European project is now in effect a machine that belongs to the world.

An even more ambitious American project was cancelled owing to cost overruns, so the LHC is likely to be the world’s premier accelerator for at least the next 15 years, home to scientists from America, Russia, Japan and everywhere else. Protons, after all, are the same from China to Peru – and indeed throughout the cosmos.

Science is a global birthright: it’s an intellectual impoverishment to be unaware of the chain of events whereby, from a mysterious beginning, atoms, stars and planets have emerged, and – on at least one planet – creatures have evolved that are able to ponder their origins.

And those creatures have come up with a colossal achievement. Within the LHC’s circular tunnel, 27km in circumference, beams of protons will be accelerated to up to 99.999999 per cent of the speed of light.

When they smash together, they will generate concentrations of energy resembling those that occurred during the first trillionth of a second after the Big Bang (without, of course, the explosive consequences).

It might seem paradoxical that such a huge instrument is needed in order to probe the very smallest entities in nature. But this is a consequence of a fundamental restriction on physical measurements – Heisenberg’s uncertainty principle.

The sub-atomic world is inherently “fuzzy”: the only way to sharpen up fine detail is by using very fast-moving and energetic particles as probes. And this is what the LHC does.

Its design combines huge civil engineering, microscopic precision, and massive computer power – it bears the same relationship to even the best-equipped laboratory as a Formula 1 racer does to the average family saloon.

And just as the engineering from Formula 1 benefits more mundane machines, so the LHC, by pushing the technological envelope, should generate productive spin-offs. After all, one well-known bonus from earlier work at CERN was the World Wide Web.

However, when the LHC is turned on this week, we should not hold our breath for exciting news. Most of the effects being sought involve very rare events – maybe only one collision in a billion. Huge volumes of data will need to be collected and sifted before any firm claims emerge.

This “big science” entails a style of work ill-suited to mavericks and individualists, but it’s an essential complement to the contribution of the swarm of theorists ready to pounce on any novel phenomenon that emerges.

Speaking as a cosmologist, I’m hopeful – indeed, I rather expect – that the LHC will reveal so-called “supersymmetric particles”. If so, we might have an answer to one of the key mysteries about the universe – the “dark matter”.

Atoms make up only around 10 per cent of the gravitating stuff that holds galaxies together. The rest probably consists of particles left over from the fiery beginning of the universe, but as yet we have only the haziest idea what they are.

But we should also keep an open mind. The most spectacular payoffs from many scientific instruments are unexpected – or indeed thought very unlikely before they are started up. The LHC may be no exception. Some optimists, indeed, hope it may reveal surprises about the nature of space itself.

At first sight, nothing seems duller than empty space. But this dismissive attitude is as misleading as it would be for a fish to take for granted the water in which it moves – or for us to believe that invisible clear air is less substantial than the clouds floating in it.

Some theories, in fact, suggest that space is actually 10-dimensional, or that there may be other entire universes “alongside” ours, like sheets of paper separated by less than a millimeter, but separated forever because they are in different dimensions.

Prima facie, these ideas seem absurd. We are three-dimensional beings: we can go left or right, forward or backward, up or down, and that is all. So how are the putative extra dimensions concealed from us?

They could, perhaps, all be wrapped up tightly: a long hosepipe may look like a line (with just one dimension) when viewed from a distance, but closer up we realize that it’s three-dimensional, just tightly wound in the other two.

By analogy, every apparent point in our three-dimensional space, if hugely magnified, may actually have some complex structure: a tightly wound origami in six extra dimensions. Most of us would bet that any such graininess is on a finer scale than even the LHC can probe: but we may be wrong.

As science advances, new questions come into focus. Many of those that now engage us could not even have been posed 20 years ago. But we shouldn’t be too bedazzled by the challenge of the very large and the very small: perhaps, just as we now understand the simplicity behind ideas such as evolution and gravity, the forces and particle of the micro-world will one day fall into some pattern that seems simple, too.

Then again, this “true” fundamental theory may just be too hard for human brains to grasp. A fish has no intellectual powers to comprehend that water consists of interlinked atoms of hydrogen and oxygen: the “deep structure” of empty space could, likewise, be far too complex for unaided human brains to grasp.

But unless we strive to understand it, we surely never will. That is what the LHC is about – and even if our generation does not find the answers, its findings will stimulate the next generation of Einsteins, who will be able to take the next steps in a quest for understanding that has already transformed our world.

Some may cavil at the cost, but it’s surely appropriate that the nation that hosted Newton and Darwin, Rutherford and Crick should sustain its investment in the whole range of fundamental science. This international enterprise should augur a fundamental and transformative episode in 21st-century science, and it’s good and right that Britain should play a prominent part.

📂This entry was posted in Technology