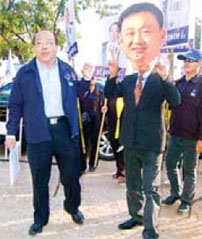 It must be a bit embarrassing to be the second name in your introduction by others. Today the world is being introduced to Thailand’s newest Prime Minister Thaksin Shinawatra’s brother in law Somchai something or other.

Already the media along with everyone else who is interested in this has placed the face and name of Thaksin back in the Prime Ministers chair. It does not matter even what his name is, he is now simply known as Thaksin’s brother in law.

So essentially the world has already connected that what’s his name is a Thaksin crony and will do what Thaksin wants. Now that Samak has been discarded by Thaksin like so many others, what’s his name simply becomes the next person to dance with the devil. As for what people expect to happen is just the continuation of what began when the People Power Party (PPP) took power. That certainly will be ‘take care of Thaksin’ by changing the Constitution, granting amnesty and so on. In short more of the same from the word go.

So any olive branches offered to the People’s Alliance for Democracy (PAD) by Thaksin’s brother in law will be seen as hollow offerings and most certainly not to be trusted. In short what’s his name has lost the game even before he starts.

One could say that this was part of Thaksin’s grand plan v2.0. v1.0 was before the September 19, 2006 coup. Ironically it is almost 2 years to the day that Thaksin’s brother in law became Prime Minister.

Considering the court has delayed the reading of Thaksin’s Ratchada court verdict until October 21, 2008 is not totally unexpected. A similar pause happened just a few months ago when the defendant also decided to skip town. The defendant is required to be present in court for the reading of the verdict. This will have some effect on how the public views the new Prime Minister Thaksin’s brother in law.

Without that close association to a convicted criminal, it will provide a little wiggle room for what’s his name. So at least for the next month he will have a little but not much more clout. After that the guilt by association will take over with a Thaksin conviction and the public will no doubt expect to see moves to pardon Thaksin from that conviction too.

In short the situation in Thailand has not changed. Thaksin is still behind the scenes, and what’s his name has just laced up a new pair of dancing shoes.

📂This entry was posted in Politics Satire Thailand