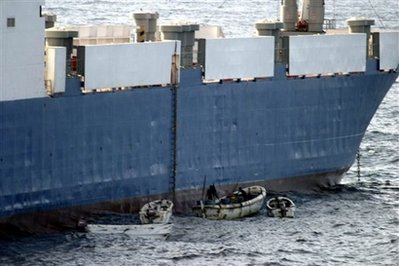 We have heard the stories of pirates attacking cargo ships off the coast of Somalia, the question is why are they so successful in their attacks. Some common sense suggests merchant ships should be properly armed and willing to make toothpicks and shark bate of the attacking small boats.

It seems no country is immune from the attacks. If the merchant ship Connecting the Dots was in or around that area, it would be well equipped with decisive fire power to put a quick end to the attack if the pirates insisted on playing along. Outrunning the pirates is one option, but that does not discourage them from trying again. However when the attack boats don’t find there way back to the pirate mother ship and the only thing left is a bunch of dead pirates, they may have second thoughts about doing that again. Seeing is Somalia has no government and hence no law, it seems a no brainer with few if any consequences.

KUALA LUMPUR, Malaysia – Pirates armed with rocket-propelled grenades attacked three vessels off Somalia’s coast but failed to hijack them because of quick action by crew members, a maritime official said Monday.
A Chinese cargo ship, a Singaporean liquefied gas carrier and a Thai bulk carrier managed to thwart the pirates in the Gulf of Aden by increasing speed and taking evasive maneuvers, said Noel Choong of the International Maritime Bureau.
Somalia, which has had no functioning government since 1991, is the world’s top piracy hotspot. The latest incidents bring to 44 the number of attacks off its coast this year. Most occurred in the Gulf of Aden, Choong said.
“Early detection allowed all three ships to report to IMB and take quick action to escape,” said Choong, who heads the IMB’s piracy reporting center in Kuala Lumpur. He said the situation was still grave despite increased patrols by warships from a multinational coalition in the area.
The Chinese-owned ship, sailing under the flag of the Caribbean island state of Saint Vincent and the Grenadines, was passing through the gulf Friday when crew noticed a blue tug identified by the IMB as a suspected pirate vessel, Choong said.
The crew raised the alarm after a speed boat from the tug headed toward the ship, he said. Four pirates armed with rocket-propelled grenades and automatic weapons started firing, but the ship escaped after it increased speed and the crew threw objects at the pirates during the chase, he said.
On Saturday, six pirates armed with rocket-propelled grenades attempted to ambush a Singaporean tanker in the gulf, Choong said. The tanker increased speed and changed course, leaving the attacking boat rolling heavily and four pirates fell into the sea, he said.
The pirates later resumed chase and the ship captain contacted the IMB, which sought help from the coalition naval force, he said. The pirates gave up their chase before a coalition warship could reach the scene, he said.
The next day, pirates in two speed boats chased a Thai bulk carrier but it also managed to evade the pirates and headed toward Yemen’s coast, Choong said.
Nobody on board the ships was injured in the incidents.
The attacks came after pirates hijacked an Egyptian cargo ship and a French sailboat last Wednesday. Ten vessels have been seized in the region since July 20.
The Gulf of Aden, which connects the Red Sea and the Indian Ocean, is one of the world’s busiest waterways with some 20,000 ships passing through it each year. The surge in pirate attacks has prompted the U.S. Naval Central Command to establish a security corridor in the gulf patrolled by the international coalition of warships.

There there is this; (photo part of this story)

NEW YORK (Reuters) – Ethiopian Prime Minister Meles Zenawi said on Saturday he was concerned by the seizure of a Ukrainian ship off Somalia carrying military supplies and feared they would be used to further destabilize the region.

Speaking before a meeting in New York with U.S. Secretary of State Condoleezza Rice, Zenes said piracy off the coast of Somalia was a “very hard problem” and he hoped the international community would respond.

“We are very concerned about the level of piracy on the seas. It is related to the instability in Somalia,” he told reporters.

Somali pirates have demanded a $35-million ransom for the Ukrainian ship they had seized which was carrying 33 tanks, grenade launchers, ammunition and other military supplies destined for Kenya.

“They could be used to destabilize the region and the whole situation on the high seas is a matter of great concern for all of us,” Zenes said.

“We very much hope the international community will respond.”

Pirates have captured more than 30 vessels off Somalia this year, making its waters the most dangerous in the world and threatening a major international shipping lane between Europe and Asia. The gangs seek, and often receive, large ransoms.

An Islamist insurgence in the south of Somalia, which has not had a functioning government for 17 years, has made it difficult for the struggling interim government to police the waters. Russia said on Friday it was sending a warship to the region to protect Russian ships and citizens.

📂This entry was posted in Somalia Terrorism