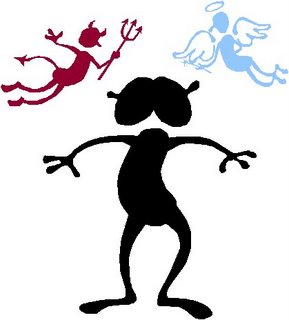 The People’s Alliance for Democracy (PAD) is slowly being seen not so much as an anti government group, but more of Thailand’s conscience. However there seems to be some indirect tempting by the devil being offered.

The PAD is the infantry doing battle against what may rightly be called the super corrupt politicians, and the battle like any prolonged battle has collateral damage. In this case the economy continues to sour because the corrupt politicians are more concerned about themselves and not the country. There is also a certain lack of knowhow and ample amounts of greed with them.

Many academics would like to see the conflict end and are suggesting a negotiated truce to fix the problem, however that would be like giving up the country for a short term gain. Involving academics is just a ruse to buy more time. There is no guarantee the corrupt politicians would adhere to whatever agreement was made. After all if they were doing what they were elected for, the PAD would be at home watching TV and not occupying the Government House. Very simply they can’t be trusted. The PAD has seen this and to compromise will lead to the eventual return to the ways of out of control corruption.

So far the PAD has slowed or stopped the advancement of changes to the Constitution. This is a good thing and given enough time, the Constitution will eventually bite, chew up and spit out all the corrupt politicians. However every time the People Power Party (PPP) brings up that they plan to change the Constitution, it is exactly like your doctor coming into the examination room and telling you the cancer is still there and active. If you don’t stop the cancer you are certainly doomed. Metaphor or not that is exactly how it feels to the Thais that truly want to move their country forward and be able to hold their head high with pride and dignity.

Right now on the world stage other countries see Thailand’s government as an animal eating it’s own tail and wondering about the Thais who were so foolish to put them in office. Although this is 100% Thai business, appearance is very important to Thais. To be seen as foolish is a loss of face. Even the hi-so Thais and pro Thaksin Thais can be seen as foolish as they should have known better.

So by just the announcement of the PPP attacking the Constitution for it’s own reason is once again the call to arms. No matter what the PPP call it, reform or whatever the Constitution is working fine, and politicians that are not corrupt will have no problem working inside it’s guidelines. Not to mention if there are any legitimate changes that need to be made, the Constitution is clearly not on the top of the list, dealing with the country and economy is. There are no restrictions for that in the Constitution, in fact it is encouraged. The governments top priority should be getting Thailand as ready as possible for a souring global economy as well as fixing the damage they already did.

The statement that Thailand would not be effected by the global economy going south is simply for the most naive to believe. Consider that Thailand is a place people go to spend their holiday from work. If the global economy goes bad and people lose their jobs, there will be no job to take a holiday from. Without a holiday and 100% of their free time spent on finding a job to take a holiday from, why would they spend a lot of money they don’t have on outrageous airfare to fly to Thailand. Consider what percentage of Thailand’s economy evolves around tourism, and the true answer is found with simple math, making use of the minus sign frequently.

The PAD although not perfect does have Thailand’s best interest in mind, and they should stick to their guns. It is only a matter of time for Thailand’s Constitution to work and eventually rid the government of the cancer of corruption. To insure the cancer does not return, an inoculation of education is needed in Isaan as well as the rest of Thailand, but understandably they are facing resistance by the corrupt politicians to educate their voter base. They clearly want to keep them uneducated and gullible.

« A guy thing Turning up the heat on Burma »

One Response to Thailand’s political conscience