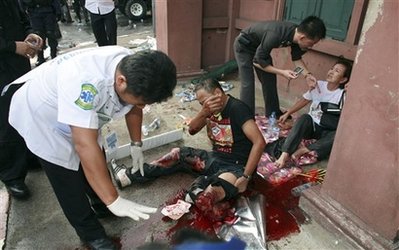 The goal of the PAD is to rid Thailand of the influence of the fugitive Thaksin Shinawatra and his cronies. The People Power Party (PPP) is being controlled by Thaksin and they are the immediate target of the PAD. So far the PAD have only made significant advancements when they use their secret weapon. When it is not being used it tends to be a stalemate. The secret weapon the PAD uses against the PPP, is the PPP itself.

Ever since the PPP took power early in the year, all their wounds have been self induced. So every time the PAD engages the PPP one way or another, the PPP shows their true colors to the world. They show that they have no morals or ethics. They also show they are self centered and clearly not doing what is in the best interests of the Thai people.

In Isaan where the PPP power base is, the people are kind, loving, and display the morals and ethics that may have been forgotten while living in Bangkok. The people in Isaan honor and respect the King, when they see how Thaksin cronies behave and appear to work against the King, the PPP lose future votes.

The PPP are doing their best to control the media so their voter base in Isaan does not see the truth about them. The unsuccessful attempt by the PAD to take over the government broadcasting station was an attempt to make use of their secret weapon. Although it was a blunder on the part of the PAD, the more the PPP shows it’s true colors, the more the attempt seems justified in the court of public opinion. However that is now up to the courts to decide if the treason charges match the crime.

If the just finished Bangkok governor election is any indication of how the war is going, the PAD seem to be winning with the PPP candidate coming in a very distant second. The true test remains in Isaan.

The key now is to keep the PPP away from the Constitution, and wait for parliament or the PPP or both to be dissolved. Once that happens any reincarnation of the PPP will be weaker.

For the PAD, this is a bit like chopping down a tree with an ax. You must hit the tree several times before it falls.