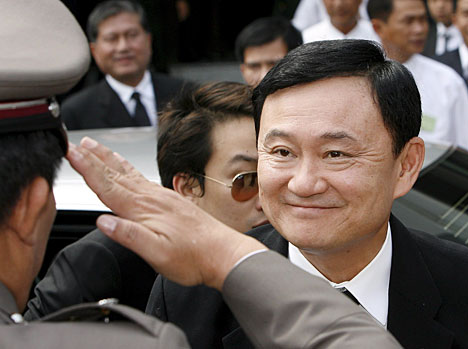 In what sounds like an eerie echo of the past, there are signs of a pro Thaksin army being formed inside the borders of Thailand. If that is the case, then Thaksin may be attempting to play his trump card before the clock and his influence runs out.

With the polls showing that the People Power Party (PPP) is slipping in popularity at an increasing speed, and time running out on several other fronts including being dissolved and getting the Constitution rewritten, the need for a group that can work outside of the various restrictions set by the law, politics, the court and morality clearly helps Thaksin. Because of that, there is a significant possibility the formation of a private Thaksin army is underway.

How this group differs from the rest of the pro government / pro Thaksin groups, is they have had formal training where the other groups are more of just mobs.

Police General Salang Bunnag Saturday revived his threat to “retake” Government House from the anti-government protesters, saying that his planned operation would begin after a religious ceremony to be held nearby on Wednesday.

Salang, a former deputy police chief, said he would lead more than 1,000 inactive or retired policemen to retake the compound and return it to the Thai people. He said a religious ceremony would be held on October 22 at the Royal Plaza where more than 10,000 Buddhist monks would say a mass prayer to bless the country and “mend torn Thai society”.

When you come down and do an analysis, this is exactly the type of tactic Thaksin has done in the past where the Forestry Department became an armed private army loyal to Thaksin. There were rampant rumors in the days leading up to the September 2006 coup, that Thaksin was mobilizing armed protestors to attack the People’s Alliance for Democracy (PAD). If the quote sounds familiar, you must remember that Thaksin is a creature of habit and does not forget a grudge. When you think about it the PPP is a private political party for Thaksin, so why should he not have a matching private army.

Another point of concern is this group may have fairly easy access to weapons as they are essentially closely tied to pro Thaksin people who have access to weapons. Seeing that the pro Thaksin side is geared to violence, and blood has already been spilled, then the scenario does fit into the realm of possibilities.

With Thaksin’s verdict due on the Ratchadaphisek land case on Tuesday, and the announced tentative assault on the PAD on Wednesday, it all fits too well to be coincidence. If Thaksin is found guilty on Tuesday, emotions will be running high amongst the pro Thaksin people and the desire to go out and kick some PAD ass will be very high. It will also add to the illusion that the attack was spontaneous and not planned in advance. Unless the army places troops around the Government house to protect the PAD, the police line will become as useless as wet toilet paper.

All things considered Thaksin has nothing to lose and he is at or very near the point where rationality will give way to survival instincts. There will only be a 30 day window to appeal a guilty verdict and the requirements are very restrictive to make that option work. That is why changing the Constitution is such a high priority for the PPP. Remove the PAD from keeping it in the spotlight, and it becomes easier to bulldoze the PPP Constitution changes through.

When it comes right down to it if Thaksin’s private army attacks the PAD, there will be a debate about who is their boss, and whatever else comes of it. Meanwhile the PPP are seen as being out of this and while attention is distracted, they can continue on their projects including the Constitution. In that case it becomes a win, win of sorts for the PPP and Thaksin. Allowing the PPP to be seen as not involved is exactly the same tactic Thaksin uses as he is always away from the scene of the crime when things go down. As long as non of the PPP members of Parliament are seen as getting involved, the illusion will be complete. However that in itself is an anomaly as the PPP is very vocal and active against the PAD. If they don’t get involved, then the likelihood that the attack was preplanned goes up dramatically.

« More miscalculations on climate change What of our children »