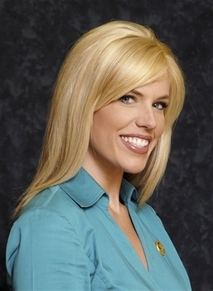 In what has turned out to be a senseless killing in a botched burglary, a popular news anchor lost her life. It is truly a shame that most likely the crime was a result of a sign of the times.

When the economy heads south, crime rates go up. However many of the crimes are more survival driven like food theft and home burglaries. Traffic in and out of pawn shops is another indicator of how things are.

Other signs are increase security at apartment buildings. An example may be the need for a key card to enter and exit the building as opposed to just enter. This gives the would be criminal plenty of time to pose for the door security camera should they manage to get past the door entering as someone else used it.

The story below is unfortunately the tip of what is to come.

Pressly, 26, was found beaten early Monday at her home. She was hospitalized and sedated.

Pressly’s parents released a statement saying they were “with her in her last moments.” They also asked for “the privacy we need at this very difficult time,” KATV reported.

Police said Pressly was apparently not targeted but was attacked during the course of a burglary. Her purse was missing.

Pressly was beaten around the head, face and neck. She had been unable to communicate with her family or police while sedated in the intensive care unit.

The anchor’s death came only a day after a doctor said he was encouraged by her recovery.
Don’t Miss

Dr. Clifton R. Johnson said Friday that swelling in Pressly’s brain had gone down since she was hospitalized and that doctors had slowly been reducing her sedative dosages.

Police have yet to identify a suspect, though detectives have combed the area around Pressly’s home in the Heights neighborhood, a mix of bungalows and mansions near the Little Rock Country Club.

News reports have said detectives found evidence that Pressly’s credit card was used Monday at a gas station a few miles from her home.

On Saturday, KATV opened its nightly news cast with a seven-minute segment devoted to Pressly. Anchor Pamela Smith told viewers that Pressly’s family agreed to have their daughter be an organ donor. Smith’s voice hitched as she read condolences sent into the station, her eyes red.

“She owned every room she was in, not because she demanded our attention, but because we willingly gave it to her,” Smith said. “We all felt a little better, a little more alive just being near her.

“Life was easy for Anne Pressly. But it is her death that is so very hard for all of us.”

A reward fund KATV set up to help find the killer or killers has reached $30,000, the station reported on its Web site Saturday night.

No funeral arrangements were immediately announced.

Pressly had a brief role as a TV commentator in Oliver Stone’s film “W.,” released in theaters earlier in October.

📂This entry was posted in Crime United States