Barking at the wind 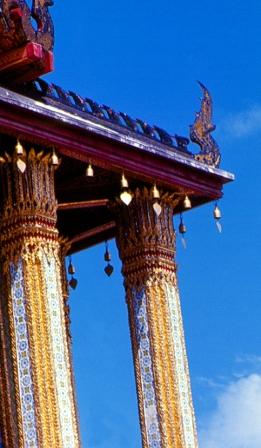 There is more than one pro government group in Thailand, and the common thread between them is they are very prone to violence. the Democratic Alliance Against Dictatorship (DAAD) is one of the more vocal groups and frequently looks to pick a fight with the Anti government group.

One of the more interesting things that leaves people wondering with a dazed and dumb look in their face, is an attack by the DAAD against morals and ethics. They submitted a protest letter against Supreme Commander Gen Songkitti Jakkabatra for having gone on TV with other military top brass and the national police chief in October to demand Prime Minister Somchai Wongsawat to resign. The fact of the matter the general talked about himself and his personal morals and ethics and that he would have resigned in the wake of the October violence that left two dead and hundreds maimed and injured.

There are similar attacks by the DAAD on others who have shown a sense of morality and ethics and doing what is right for the country. Most recent attacks have to do with people or groups abstaining from the rewriting the Constitution as they see it as self serving and wrong for Thailand.

If that is what the DAAD have to say, one has to wonder what is going on in their heads. You might expect the same rationality from a serial killer, and that would also help explain their frequent violence. The selection of the color red for the pro government groups is actually a bit disturbing if you stop and think about it. Red is associated with violence and seen as the color of war.

For the Thais who may find themselves following the red banner, there no doubt is a concern. Many are not as violent as the core group, but there is no other ride in town. It comes down to the DAAD or the People’s Alliance for Democracy (PAD) that is the anti government group. It is the Thais who are not violent and have joined the DAAD who will suffer the most mental anguish in the end.

As not all Thais are as violent as the DAAD core group. The core group piles on the propaganda to stir the fire much the same as the Nazi party did in Germany in the years leading up to world war two. On the other side the PAD really does not need a thick layer of propaganda, as what they are looking to do matches what good parents teach their children. That teaching being the core values of right from wrong and good from evil.

Another disturbing thing about the DAAD is they want the PAD to stop wearing yellow as it is associated with the King of Thailand. That is simply another loss of connection with reality on the part of the DAAD. The fact is the PAD is essentially fighting not only for the sake of the country, but also for the monarchy. That makes the color yellow entirely appropriate. The Queen even made that connection at a funeral for one of the female PAD members who died on October 7 when the police fired explosive teargas at her. The attempt to disassociate the PAD from what they stand for is actually very sad, and it does suggest a very disturbed mind. It shows the inability to connect with the fact that essentially the DAAD is supporting the bad guys. Add to that they are now also supporting a convicted criminal and fugitive by the name of Thaksin Shinawatra.

When viewed by others from the outside of Thailand, it becomes increasingly clear who the good guys are and who the bad guys are. Unfortunately when this is finally all over and just a sad part of Thai history, there will be plenty of work for mental health providers in Thailand, as the Thai people who stood with the DAAD come to realize that they have lost face in a big way. If loss of face is severe enough for a Thai, they will take their own life, and this certainly does qualify. Once they connect that they have been fighting against the people who are truly fighting for their beloved King, that will mentally hit them like a ton of bricks. Helping those mislead Thais will also require the understanding of the anti government supporters to give forgiveness. That is truly what it will take to mend the divide that Thaksin has caused, and start the healing process.

« Assumption vote No surprises from Thaksin »