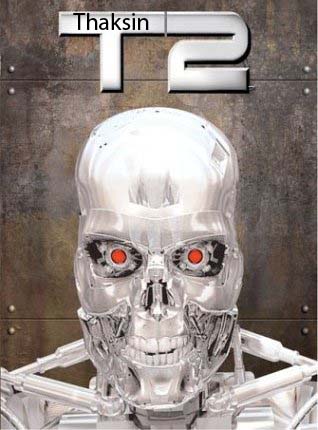 No matter what dictionary definition of the word ‘mad’ you use, it will probably be a genuine description of the fugitive from Thailand Thaksin Shinawatra. As predicted by Connecting the Dots, he is now attacking the British government for revoking his visa. But Thaksin did not stop there.

Back on November 8, Connecting the Dots wrote in “Thaksin musical chairs”  that sooner or later Thaksin would attack the British government for revoking his visa. We had a few emails saying that was a long shot and that Thaksin would not be so foolish, needless to say.

Based on Thaksin’s past history he will most likely attempt to bribe someone to get back into Great Britain, but he has become too hot to touch because he has chosen the high profile road. When that fails he will turn on the Brits and attempt to use financial pressure through the companies he owns and oversees.

Thaksin : UK will be sorry

Ex-Prime Minister Thaksin Shinawatra has lashed out at the UK for revoking his visa, saying the British government was not respecting its own democratic values.

In an exclusive interview with Arabian Business, to be published next Sunday, Thaksin said the UK would “feel sorrow” for revoking his visa.

The stinging criticism contracted his earlier statement that he chose to live in exile in UK because it was a “democratically mature” country.

Another irony was his choice of Dubai _ which like Thailand is under constitutional monarchy _ as a staging ground to preach democracy and attack a democratic model like UK.

“England must understand better, but unfortunately they are now busy with their own problems – so they forgot about democratic values,” Thaksin said during an interview in Dubai.

Thaksin’s UK visa was cancelled earlier this month following his conviction for corruption in Thailand. He had fled to the UK in 2006 following a military coup that removed him from power.

Thaksin vowed to return to Thailand at some stage, stating that he could bring confidence back to the country.

“With me at the helm I can bring confidence quickly back to Thailand. We have to find a mechanism under which I can go back, that is why I must tell you that I will go back into politics.”

However, Thaksin said he would only return if the people and the king of Thailand wanted him to go back.

He didn’t mention the two-year jail term he is supposed to serve after the Supreme Court last month found him guilty of violating conflicts of interests laws.

“I think a lot depends on the power of the people. If they feel they are in hardship and they need me to help them, I will go back,” he said.

The full, exclusive interview with Shinawatra will be published in Arabian Business on Sunday Nov. 30, and from 10am on Thursday Nov. 27 online at ArabianBusiness.com.

This Thaksin ploy is designed to bestow more pity from his lesser educated voter base in Isaan. However the fallout this will have elsewhere around the globe clearly makes Thaksin more undesirable. It also further embarrasses Thailand’s single minded ‘help Thaksin’ puppet government.

Thaksin’s statement also puts down his own People Power Party by suggesting they are incompetent and the he is the only one that can pull it off. That is nothing new for Thaksin referring to everyone else as minions either directly or indirectly.

The worst thing is Thaksin has given an ultimatum of only 2 choices to the King, and even a blind deaf mute can see that is completely wrong. Absolutely nobody gives ultimatums to the King of Thailand and expects to survive. Even just hinting at disturbing the King can get you thrown in jail. That one statement may have cost Thaksin everything, but then again Thaksin is mad.

As for what will happen next, we will reserve our predictions as there is way too much going on and too many variables to consider. However gut feeling is along the lines of pointing out Thaksin appears to be or is looking down at the King and giving ultimatums.

However there is no doubt that the abbot of Wat Suan Kaew who banned Thaksin’s call in and the British government are now on Thaksin’s much talked about political enemy list and who he will deal with. But not to worry as it would seem anyone grounded in reality who confronts Thaksin is on the same list.

📂This entry was posted in Great Britain Law And Order Thailand