Fighting terrorism or something else 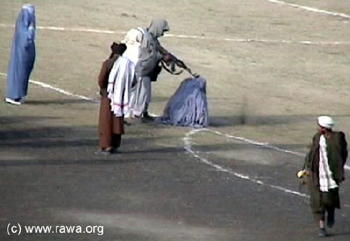 In the global fight against terrorism, occasionally things happen that leave you wondering just what it is you are fighting. When just asking a question can get you a death sentence in some countries, the target called terrorism becomes very blurred.

Afghanistan is one of the toughest places in the world to live quite literally. When asking a question can get you killed, you begin to wonder just how much of that home grown opium finds it’s way into domestic usage. To put it bluntly, some of the extreme views in Afghanistan one may expect from a brain that has been fried with opium based drugs. Anyone that knows someone who has been dipping into the heavy stuff will immediately connect that this behavior and distorted view of things is common.

That is not to say that drug usage is the problem, however it does provide a reasonable explanation as to why such extreme views of Islam are found in Afghanistan. Men with dominant personalities will no doubt force their will onto others if given the chance. If generations of people follow this behavior and it was influenced by drug usage, then it becomes the norm and accepted. It however is very unfortunate that the extreme view comes with violence and death for non compliance. Species that kill their own often become extinct unless the number of offspring is high. In this case you can come to your own conclusions. If that level of force is required to insure compliance, then clearly it does not match with natural human traits. Natural human traits come all by themselves without the need to be forced.

It is the extreme views that are the first to go in society as a whole. It is a bit like driving your car along the edge of the road, sooner or later you will drive over something and get a flat tire.

KABUL, Afghanistan (AP)  — An Afghan appeals court overturned a death sentence Tuesday for a journalism student accused of blasphemy for asking questions in class about women’s rights under Islam. But the judges still sentenced him to 20 years in prison.
Parwez Kambakhsh listens to allegations against him at his trial in Kabul, Afghanistan, on Tuesday.

The case against 24-year-old Parwez Kambakhsh, whose brother has angered Afghan warlords with his own writings, has come to symbolize Afghanistan’s slide toward an ultraconservative view on religious and individual freedoms.

“I don’t accept the court’s decision,” Kambakhsh told The Associated Press as he was leaving the courtroom. “It is an unfair decision.”

The case can be appealed to the Supreme Court, the highest court in Afghanistan.

John Dempsey, a U.S. lawyer working for six years to reform the Afghan justice system, said Kambakhsh has yet to get a fair trial.

“Procedurally, he did not have many of his rights respected,” said Dempsey, who attended the trial. “He was detained far longer than he should have been legally held. The defense lawyer was not even allowed to meet the witnesses until a night before the trial.”

Kambakhsh was studying journalism at Balkh University in the northern city of Mazar-i-Sharif and writing for local newspapers when he was arrested in October 2007.

Besides the accusation that Kambakhsh disrupted class with his questions, prosecutors also said he illegally distributed an article he printed off the Internet that asks why Islam does not modernize to give women equal rights. He also allegedly wrote his own comments on the paper.

In January, a lower court sentenced him to death in a trial critics have called flawed in part because Kambakhsh had no lawyer representing him. Muslim clerics welcomed that court’s decision and public demonstrations were held against the journalism student because of perceptions he had violated the tenets of Islam.

On Tuesday, five witnesses from Mazar-e-Sharif — two students and three teachers — appeared before the three-judge panel.

The first witness, a student who gave only one name, Hamid, told the court he had been forced into making a statement accusing Kambakhsh of blasphemy by members of Afghanistan’s intelligence service and a professor. He said the professor threatened him with expulsion.

Other witnesses, however, testified that Kambakhsh had violated tenets of Islam.

The head of Tuesday’s panel, Abdul Salaam Qazizada, struck down the lower court’s death penalty and sentenced Kambakhsh to 20 years behind bars.

The New York-based Committee to Protect Journalists condemned the sentence.

“Even though Kambakhsh’s death penalty was overturned, today’s sentencing is a great disappointment and a setback for the rights of free expression in Afghanistan,” Bob Dietz, the Asia program coordinator for the committee, said in a statement.

The committee said earlier this year it was concerned that Kambakhsh may have been targeted because his brother, Yaqub Ibrahimi, had written about human rights violations and local politics.

Ibrahimi told the AP on Tuesday that his brother was sentenced because of the pressure from warlords and other strongmen in northern Afghanistan, whom he has criticized in his writings.

📂This entry was posted in Afghanistan Observations Terrorism