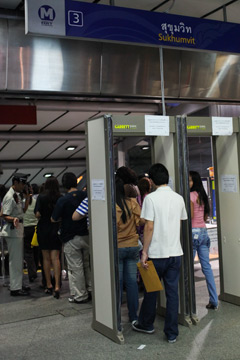 If you were to wander about Bangkok Thailand, you may notice some increased bomb hunting security here and there. The question is why nobody announced the increased security, or are there dots to connect because nobody wants to make an announcement further hurting the crippled tourist trade.

Connecting the Dots sees a trend here, but as yet there are too few dots to make a picture. So keep an open mind when you read this, as this is more speculation than anything.

On a quick rundown of events in Bangkok over the last 36 months or so, there has been some behavior often sighted as being associated with Thaksin. That behavior is violence in one form or another. Starting with the physical attacks on Anti Thaksin protestors in the months leading up to the September 2006 coup.  Next three months after the coup on the 2006 – 2007 New Years eve there were several bombs that exploded around Bangkok. Although the culprits were never found, the bombs were 100% political and had Thaksin’s signature of violence all over them. There were enough dots after to paint that very clearly. Bombs would only explode when Thaksin was the underdog.

Come New Years eve 2007 – 2008, and Thaksin’s People Power Party (PPP) was just elected. That night went off without a hitch. Thaksin was not the underdog.

As 2008 wore on, the PPP came under increasing pressure to step down for a variety of reasons. As the pressure increased and Thaksin was once again becoming the underdog, the explosions around Bangkok returned all directed at anti Thaksin people. The explosions came in many forms, from dismembering and fatal tear gas canisters, to military ordinance. There were a few home made bombs thrown in for good measure too.

Now forward to December 2008 and we have the PPP dissolved for election fraud, and Thaksin’s coalition has left him and is now siding with the Democrats. Quick translation Thaksin is the underdog again, and New years eve 2008 – 2009 is quickly approaching.

The one difference now is there is absolutely no doubt Thaksin is mad. (a post we also covered a while back.) So it goes without saying based on the sudden appearance of walk thru metal detectors at the subway, that the Thais expect some gifts from Thaksin, as it would also fit his agenda to divide Thailand.

All things considered the metal detectors are just for show and will never be properly used with the huge volume of people at rush hour. And if one was to plant a bomb, rush hour would be the time to produce the most injuries.  Even the metal detectors at the MBK shopping complex emit a continuous alarm tone as people walk through them unchecked past the smiling security guards. In short it is all show with no substance.

So what can people expect this New Years eve in Bangkok is a mad Thaksin lurking some place trying to keep his location secret. Angry pro Thaksin supporters who have shown they are not afraid to kill, and Thailand doing it’s best to restore the face it once had in the eyes of tourists.