It is hard to believe that the people who want to help a person actually cause trauma where none was before. The supposed victim was just fine until someone told them they were not.

It happens time and time again in every country in every society, people who want to help, actually hurt. Now you may ask yourself how can this be, these are the people who want to help. This is probably best explained with a hypothetical situation. Lets assume a 9 year old girl finds herself having sex. The first thought in everyone’s mind is she is being sexually assaulted by a pedophile. However in reality the 9 year old girl discovers she actually likes sex, and is looking forward to the next encounter. In her mind this is a good thing that feels good, it is just that simple. Trauma is not experienced until she is informed by someone in society that what she did was wrong. At that point guilt and remorse are implied and that she was some how a victim of a crime. In short trauma is suggested and she will respond by experiencing trauma.

You can plug in any variable and the results are the same. It could be as simple as a Muslim women showing her uncovered face in public. In that society showing her face is unacceptable and perhaps even a crime, and she will suffer the same implied guilt and eventually emotional trauma. In just about every other part of the world, people wonder what the big deal is about showing her face and see nothing wrong with it. However in that Muslim society she will be traumatized.

So with this in mind you can assume that this implied trauma keeps people under control after all it serves no other reason. Countless hours with mental health professionals are the result.

There is also trauma caused by the desire to perform or meet some standard. People with eating disorders often think they are too fat because they saw someone who was naturally petite. The same can be true in academics where the pressure to perform can be overwhelming. In short it is all about fitting the mold of society.

Trying to fit the mold of political correctness can and does cause trauma and stress. Going overboard trying not to hurt someone’s feelings can actually lead to premature ageing as stress is closely associated with how gracefully someone ages.

When Hollywood movies depict someone getting fed up with being politically correct and tells someone off by calling it like it is, the response in the movie is that this person is a hero (he’s the man). The response depicted is no less than that of Rambo successfully taking out the enemy or someone diverting a catastrophe. The feeling one gets when the bad guy gets his just deserve is identical.  The problem is it should not be. Speaking your mind and saving the world are very far apart in reality. If a person feels speaking your mind is saving the world, something is very, very wrong. Society has induced this trauma as a result of repression.

Repression by political correctness in the west is now on par with countries like Burma and China. If you speak your mind, you will be punished. It is a sad but true reality. The worst part about it, it’s entirely self induced. When one can connect the now famous picture of one man stopping a column of tanks in Tiananmen Square during the protests of 1989 with repression by political correctness in the west, it expresses the level of trauma society is producing in a free country. 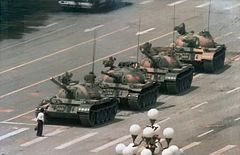