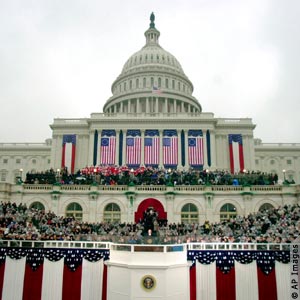 At 12:00 noon today on the steps of the Capital in Washington D.C., Barack Obama will place his hand on the same bible that Abraham Lincoln used 148 years ago today when he was sworn into office. Those 35 words of the oath of office is all that stands between hope and reality.

Today there will be celebrations around America and several places around the world with people who are not Americans. The celebrations will be in many languages, but all speak of the same hope that will today rest on the shoulders of one man.

The change of power will go something like this;

About 10:30 am President elect Obama will be given access to ‘The Football.’ the football is the nickname given to the suitcase that carries all the presidential codes to launch America’s nuclear weapons. This will alone make him the most powerful man in the world if you consider firepower. All things considered his ability to bring about the needed change to move the world into this new century and millennium is the true test of his strength.

He will also be given classified information that the President is entitled to. Some people joke that the information includes the mobile phone numbers of the aliens that pilot the UFOs around the world. More realistically, he will be given information on secret government projects active or under development.

Around 11:15 both the outgoing President Bush and incoming President Obama will be seated, and a series of short speeches will be given by various people to commemorate the occasion.

At exactly 12:00 pm Barack Obama will take the oath of office, followed by a short speech. The rest of the day into the night there will be parades and at least 40 inaugural balls. The new President will attend several and eventually find his way to his new home for at least the next 4 years.

Tomorrow reality arrives and the world will start to learn about the new President’s policies that he has kept to himself citing that there can only be one president at a time. Now is his time.

One Response to Obama’s day