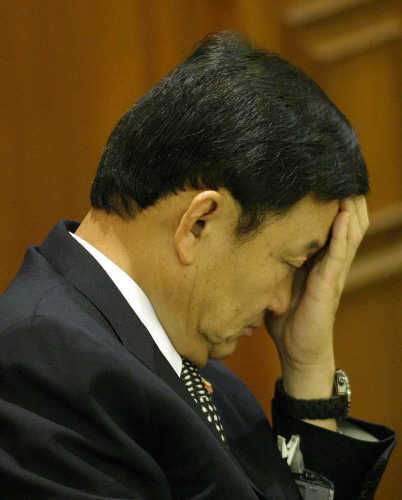 Thaksin Shinawatra’s arrogance and not knowing when to back down has placed him on an endless visa run. As of late Thaksin has made a game of hide and seek of it.

Connecting the Dots thought it would be fun to track down Thaksin and where he would likely go. His situation is getting worse by the day as it appears the bridge he is on is burning at both ends. He does not want to go back to Thailand because he will have to face justice, and one by one countries are closing their borders to him slowly reducing his I want to be a fugitive on the run options.

Thaksin’s visa run started when his arrogance made him decide to leave London and go and attack his political enemies in Thailand. That is political enemies in his mind as he is still banned from politics until 2012. A person on the run normally likes to hide in the shadows unless there is something mentally wrong with them. Calling attention to themselves is a bit like that big nasty cockroach sitting in the middle of the floor waiting to discover the bottom of your shoe.

So looking at Thaksin’s diminishing options and the threat his passport may be canceled at any time he must play a bit of Russian roulette. This is to avoid getting stuck in a country that has extradition laws and a very limited stay tourist visa like Thailand. If his visa is canceled he will no doubt apply for some asylum in the country he is in. At that point if they say no, next stop will be Thailand for Thaksin. There is no doubt this is heavy on Thaksin’s mind. Because of that Connecting the Dots is sure he has huge sums of cash on hand to try to bribe his way in. But that will have limited effect because Thaksin will tend to spoil relationships with that country and Thailand.

Lately everything that has come from Thaksin’s mouth has been to divide Thailand and cause anger. So what country would really want a trouble making fugitive on their soil. Knowing Thaksin full well, he can not keep quiet so he will not be allowed to stay. The term jumping on thin ice comes to mind here

So no doubt Thaksin has set up a point system based on the laws and extradition treaties with Thailand. Only the most favorable countries will take him so those for the most spots are destination countries. So that for the most part rules out the west leaving Asia. However even in Asia things are not looking so hot for Thaksin. Japan has already said no to entry and other countries look to follow also. Thaksin was also just given the boot at Manchester City the foot ball club he once owned. The new middle east owners have seemingly abandoned Thaksin. So that would suggest he is not on the red carpet in the middle east either.