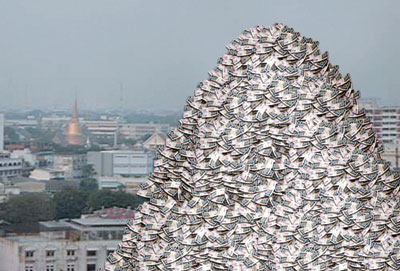 When it comes down to figuring out a dollar amount of how much the convicted fugitive Thaksin Shinawatra is worth, there is a significant chance Thaksin does not even know himself. Hiding his money under layers of deception takes time to both do and undo.

There have been numerous news and blog stories attaching a dollar amount to Thaksin. They range from 200 million dollars and up. The fact of the matter is any such news has been planted by Thaksin himself. The Thai government is still busy finding where Thaksin hid his money, or more correctly the money of the people of Thailand. That task could easily take several more years to complete even with a small task force on the case.

There have even been some deceptive ploys seeking contributions to support Thaksin’s red shirt army suggesting Thaksin is broke or quickly heading there. All things considered Thaksin has taken a hit the same as everyone. Depending on where his money really is will help to evaluate his worth.

Looking at where Thaksin invested in the past, much of that was in consumables. Telecommunication requires people to make monthly payments or pre pay for service. Although the supporting hardware industry may have taken a dive as people hold on to their old equipment, the service to use it is fed daily unless tin cans connected with string comes back into fashion as a primary mode of communication. So in short Thaksin’s financial hit is not as hard as others. The simple fact is Thaksin’s net worth is being renewed daily.

There are a few indicators that will be a telltale sign Thaksin is running out of money, and the first will be selling things to generate cash. Outside of the past few months Thaksin has been buying things, and that is not the sign of being broke. Houses and other luxury items are not investments but more of being self indulgent as those values continue to dive. Seeing for the moment he is still on his endless visa run staying in a house will be a bit difficult.

His sale of Manchester city was more forced by circumstances and not elective. Thaksin knew he would be forced to sell, so to make it appear he was still in control a hasty deal was struck. So essentially that does not count as an indicator. Thaksin may also be forced to divest in other places, but the operative word here is ‘may’ as they are still unknown if and where they would be.

Considering Thaksin’s children and where they are about the globe will shed some light on what are essential properties and unused properties. Unused and unaccessible houses would be the first to go on the market. Whether they are sold or not is another story. The fact that they go on the market is the indicator and not the actual sale.

The money that is locked down in Thailand is not considered, but only what is available for Thaksin outside of Thailand.

So when it comes right down to it, sorting out Thaksin’s net worth is a cross between doing a crossword puzzle in an unfamiliar language and deciphering encrypted data.

📂This entry was posted in Dots Thailand

« Sticks and stones Choice of words »

One Response to Evaluating Thaksin’s net worth