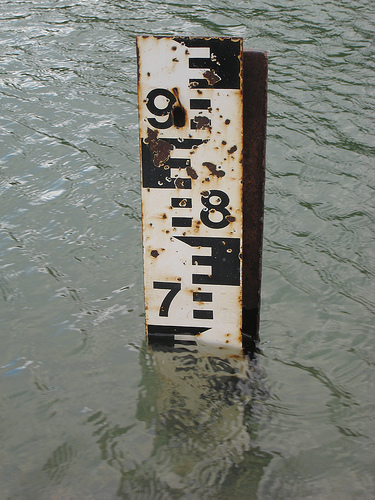 Being wrong about how fast global warming will change our planet seems to be the norm. As we have no models to use as templates, our best scientists best guesses are off actual times by several decades. The bad part is the actual times are much sooner than what was predicted.

Connecting the Dots did a story back in October saying our predictions were off by 30 years or more. The tipping point has come and now it is just hold on to your ass. As for sea level rise, lets look at what has happened.

When huge chunks of ice decide to give out and melt, they do so with astonishing speed. What seems to be a factor is what Connecting the Dots will simply call melt puddles. Understanding that dark objects gather heat faster than light objects, hot weak spots in the ice form. This is best compared to a perforated piece of paper that helps you tear along a line. And example would be separating your pay check from your pay stub. As these melt puddles form, the demise of the ice shelf is greatly accelerated. In one case in Antarctica, one estimate was 3 to 5 years, but in actuality it was just one month.

When that happens the dark water will be in very close proximity to land ice, and warm the air around that land ice. Once that happens the melt rate of land ice will accelerate. Greenland and Antarctica hold enough land ice to put many of the major costal cities significantly underwater. That includes New York, Bangkok and a few other major population centers.

Although the floating ice will not rise sea levels much as only 12% of ice is above the surface, the land bound ice will displace 100% of it’s volume when if melts or crashes into the sea.

One thing that has been seen is the rate of sea level rise is not constant. Because of that it can not be properly charted. When a huge chunk of ice lets go the rise is fast and when the dark color is exposed, that area becomes an area of accelerated melt. Once that new dark area is exposed it will become part of the melt calculation formula.

Another factor that is nearly impossible to predict is a new vertical force factor. As the sea level rises the floating ice will want to rise too. This is like tying to bend a frozen chocolate bar. With all things considered including the tide, the average vertical pressure is increased. The tide will flex and relax vertical pressure. However as the sea level rises, the relax is less and the flex is more. Couple that with the weak spots caused by melt puddles and you can see why huge chunks just snap off. That ice has for the most part been in place for thousands of years, and now unusual vertical pressure is being exerted on it.

It does not take much of a scientist to know that the more dark area exposed to the sun, the faster the melt rate. So in a general sense, the sea level rise is accelerating. As huge changes in dark areas seemingly happen over night, you can see why it is so hard to predict. The final warning will be what can be called a cascade melt as everyday significant dark water and dark land is exposed. This will signal the start of the grand melt and sea levels can rise several inches in a single year. At that point it will be too late and we will not be able to keep up. When will that happen we can not say, but it is more and more certain that it will happen before many of us living now die of old age.

📂This entry was posted in Antarctica Greenland Nature

« Cat and mouse with Thaksin Doing business in Thailand »