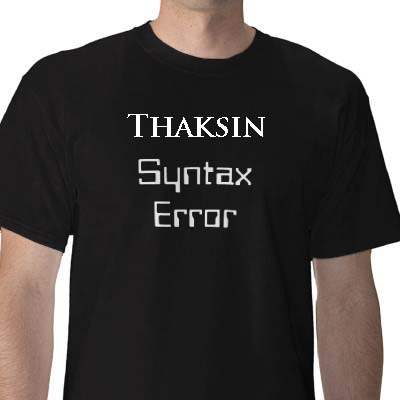 It seems everyone is getting into the act of picking apart Thaksin these days. It does not matter if you are an ambassador or someone working in some capacity for the King.

Anyone that knows and understands Thaksin Shinawatra knows that what comes out of his mouth is often if not always opposite the truth. In two recent comments from Thaksin that were out and out lies, he has called the worlds attention to the fact that people should not believe what Thaksin says.

The first one was that his canceled visa from the British government has been reinstated. That managed to get the worlds attention and raised questions if Thaksin had some how bribed his visa back. The thought and speculation of that possibility simply tarnished the image of the British government. This caused the British ambassador to Thailand to be front and center news for a day or two.

The second one was Thaksin saying that he was seeking a pardon from the King of Thailand. He said it in such a way that it caused confusion and gave him a chance to back out if it backfired. Non the less it was hinting at a pardon because it was all key words said in the same breath more or less being letter, King, court case, pardon. That one managed to get the royal institution in the picture and they simply said no such application had been made.

The fact that Thaksin is coming out with huge lies that are so easy to disprove is a clear sign of change and desperation on Thaksin’s part. Before his lies took much longer to identify, so as a simple rule of thumb, experienced Thaksin interpreters just normally assumed the opposite of what Thaksin said.

The huge personal damage to whatever remaining respect people have left for Thaksin is quickly being eroded. That will have a negative affect on his business dealing in that simply nobody will believe a word he says when it comes to making business deals with him.

Even the powder puff interviews Thaksin had shortly after the coup that unseated him have come to an end. The interviewing journalists are on the attack looking to get Thaksin to dig his hole ever deeper. Where once Thaksin was afforded the luxury of picking and choosing what interviews he would grant, his desperation to be seen by his supporters at any cost has exposed him to damning questions that generate very obvious lies for answers.

The fact that Thaksin is a convicted fugitive changes the formula. It is starting to make Thaksin look like a performing animal. Giving the spotlight to a criminal dictator type and ask them to justify their actions, and they will proceed to spew a whole bunch of distorted views and lies. This makes people roll their eyes and it becomes a form of entertainment of sorts. Their reward is getting the chance to be in the spotlight. This is not unlike giving a fish to a performing seal or dolphin for successfully performing a trick.

This is yet another example of Thaksin destroying himself. As Connecting the Dots predicted he was compelled to some how speak in Hong Kong and avoid arrest. So in a classic Thaksin can never come in second arrogance move, he did so by video link outside of the reach of Thailand, thus showing total disrespect for Thailand’s courts and government. He had to show he did not care about anyone except himself.  During that presentation he was also compelled to bring attention to his personal situation and not talk about the economic situation as it pertained to Thailand that was the theme of the presentation.

« Show it all off Staying young Part 1 »