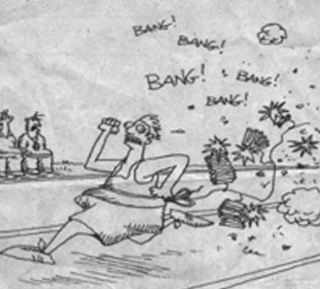 One of Thaksin’s cronies who has a very big mouth that has gotten him into trouble on more than one occasion, also has a good set of running shoes. He can set record times fleeing from Thailand when things head south.

Jakrapob Penkair has been known to be one of the more violent and active Thaksin cronies. It is very easy to spot that he has a bully mentality. When he is surrounded by people he is very bold, but when things turn against him, he can flee the scene faster than Scottie can get the Enterprise into warp drive.

When the 2006 coup went down, Jakrapob Penkair was out of the country in just a few hours. We are sure he did not have time to pack, he just ran. He only started to reappear when things looked to turn his way. Once emboldened his mouth managed to get him in trouble again and now faces a lese majeste charge.

During the red shirt rally that caused the government to call for a state of emergency,  Jakrapob managed to speak words that could charge him with treason making the lese majeste charge look like a slap on the wrist. Needless to say, when the red shirt leaders decided to surrender as the army was closing in, Jakrapob went on the run yet again.

Where and when he will pop up again is unknown, but one thing is certain, his dance with the devil may have cost him his life if treason charges are brought against him.

The reason Connecting the Dot is talking about Jakrapob Penkair is not because he acts this way, it is because he is a key indicator as to what Thaksin’s plans are. Jakrapob for the most part tends to be more violent than most Thaksin cronies, and he is often in the middle of conflict. He was in the middle of the mob that assaulted Prem’s house in 2007 when things were being tossed over the wall as just one example. So seeing as violence seems to be the theme, Jakrapob will probably be in close proximity to the next outbreak. However that is only of the other red shirt leaders that surrendered get out on bail. If they are down for the count, then Jakrapob will be in hiding for a very long time.