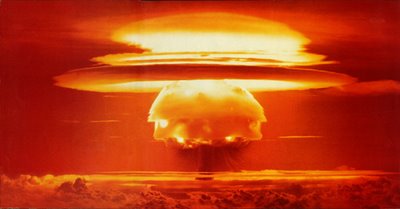 It would seem that throughout history that a lesson learned often becomes a lesson forgotten. Some of the biggest lessons involve the most loss of life. It is those lessons that we must continuously remind ourselves of.

In the 1940’s when the United States first unlocked the power of the atom, one of the very first uses was to being about the end of World War II. That was done by dropping an atomic bomb on Hiroshima and Nagasaki Japan. It was those 2 nuclear blasts that forever changed humanity as we now possessed the power to obliterate ourselves in an instant.

Let is not forget our ability to improve our destructive power, what was dropped on Japan had the power to take out lower Manhattan, what we have now can take out the entire city of New York. The difference between the 15 Kiloton Nuclear bomb used on Hiroshima Japan and a 25 Megaton standard of today, you can expect your house to become toothpicks 14 miles (22 km) from the blast if at ground level. However expect the blast to be some distance above the ground so that 14 miles suddenly becomes 20 plus miles (32 km).

With that consideration of destruction, you can see why countries are not too comfortable with the leaders of other countries who have lost contact with reality. North Korea and Iran top the list. Is there any wonder why sanctions have been imposed on those countries.

It is this lesson that we must not forget, and the countries who regularly rattle their nuclear saber invite a preemptive strike by countries who seem to show a level of sanity.

It is only the Japanese people that seek to remind us every year on the anniversary of the blast that ended so many lives in an instant. Unfortunately as the people who remember the blast die and younger generations take control, it is this non memory that often leads to relearning of lessons. They only have grainy and aging photos to remind them. The smell of burnt and dead flesh, the sight of people lingering on for days or weeks before they die of radiation exposure is not in their mind. In short they have not experienced the trauma that reminds people why nuclear weapons are not used.

When President Obama was sworn into office, few people noticed a man with a suitcase leave the side of George Bush and move behind Barack Obama. That suitcase is called the ‘Football’ or more specifically the nuclear football. The football essentially is the launch button for America’s nuclear weapons, and only the President has the authority to do that. Not even the Vice President can launch the nuclear weapons.

So the question is now, will we some day forget this lesson and discover the meaning of the acronym M.A.D. that stands for Mutually Assured Destruction. Will some leader simply decide to make the suicidal mistake of launching a strike, or simply compel a preemptive strike on themselves. It is this nuclear lesson that we must never forget. The day we forget, may very well be the end of humanity.