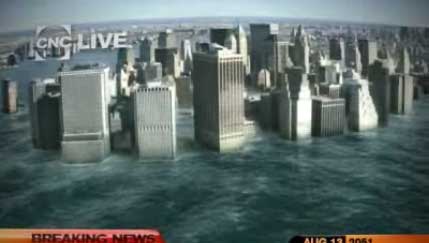 Hurricane Katrina most certainly make it’s mark in the minds of many in America as it flooded New Orleans, but that is nothing when compared to what is coming when all that ice in Antarctica finally melts when global warming takes over. If you can imagine inland cities like Hartford Connecticut becoming beach front cities, then you will have some idea of just how much ice is getting ready to melt.

The story below is just one of many that is alarming when people come to realize just how much ice there is in Antarctic. Places like Greenland will just be the sample platter before the main course.

TROLL RESEARCH STATION, Antarctica – Antarctica’s western ice sheet is pushing ever faster into the sea, but scientists know an even greater long-term threat lies here in the vast, little-explored whiteness of east Antarctica.

An “absolutely titanic” store of ice that sits atop the east Antarctic plateau should be more closely monitored by glaciologists, the world’s thinly spread corps of ice specialists, says Ted Scambos, a leading U.S. expert whose team last weekend finished a two-month scientific expedition across the forbidding plateau.

Scambos and Tom Neumann, leader of that joint U.S.-Norwegian “traverse” from the South Pole to this Norwegian outpost, commented Wednesday after the release in Geneva of a report summarizing initial findings from the 2007-2009 International Polar Year (IPY), a program of intensified research in the polar regions.

That report said west Antarctica has been warming, ice shelves floating on the sea fringing the west coast are weakening, and the glaciers they hold back are pouring ice faster into the sea.

The report doesn’t forecast immediate Antarctic disasters because of global warming. Scientists point out, however, that if the western ice sheet ever collapsed completely, it would add some 7 meters to sea levels worldwide.

East Antarctica’s ice appears more stable than the west’s — “I wouldn’t say it’s stable, but more stable,” said Neumann — but it has the theoretical potential to add some 200 feet (60 meters) to sea levels in centuries to come, scientists say. Even a small, more immediate shift here could raise oceans significantly.

Concerned Norwegian researchers plan to investigate the state of the Fimbul Ice Shelf, a gigantic table of thick ice reaching 120 miles into the sea at the coast 100 miles north of this research station, which sits in a stony mountain valley hemmed in by glaciers rumbling in slow motion toward the far-off southern Atlantic.

Kim Holmen, research director for the Norwegian Polar Institute, which operates Troll, took note of the melting ice shelves of the west.

“This is something we think is happening to the ice shelves in Dronning Maud Land,” he said, referring to this Norwegian-claimed sector of east Antarctica. “The water coming in under the shelves is 1-degree (Celsius) warmer” — almost 2 degrees Fahrenheit.

Scambos, lead scientist at the U.S. National Snow and Ice Data Center at the University of Colorado, pointed out that a recently published research paper in the journal Nature indicated that east Antarctica, contrary to earlier scientific belief, has been warming in recent decades.

“Our preliminary results support that,” he said of the traverse expedition’s research. “The temperature measurements we were able to make looks like there was a very slight warming.”

The 12-member U.S.-Norwegian team drilled deep cores into the eastern ice sheet to assess recent and historical climate trends, checked ice thickness with radar, and made other measurements. They drove the 1,400 miles (2,300 kilometers) in a caravan of snow tractors pulling research, kitchen and sleeping modules on giant skis.

The interior of east Antarctica is almost entirely unexplored. “The area we traveled through had not been visited by a scientific traverse since the 1960s,” said NASA glaciologist Neumann.

“This part of Antarctica is approximately the same size as Greenland and we don’t know very much about it,” he said. “But I hope our data on the ground will allow us to make a much better assessment of how this area is changing.”

That will take months of follow-up analysis. Meantime, Scambos said, Wednesday’s IPY report “gives us an idea of what sort of trouble we are getting ourselves into if we don’t begin to turn around the impact of greenhouse gases on climate.”

📂This entry was posted in Antarctica Greenland Nature United States

« GM to pay price of not evolving Annoying people »

One Response to Katrina was nothing