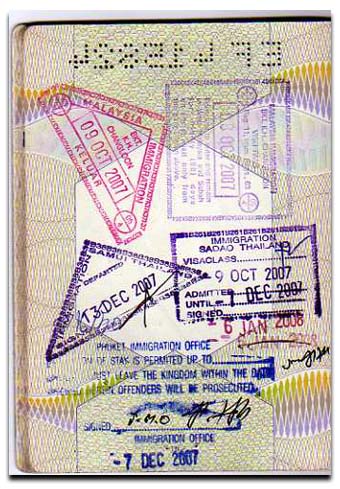 From 2006 Thailand has been making it more and more difficult for non Thais to live in Thailand. There have been a series of hoops added to discourage people staying. So now the game has come down to you can only do it this way.

As of June 1, 2009 new stricter regulations are being used further discouraging people from staying. The one thing about all this is whoever is making these decisions is keeping a very low profile and not taking credit where credit is due.

This whole thing started in 2006 when a teacher who obviously had some psychological problems made the claim he was the killer in a high profile murder of a very young girl in the US. As it turned out he was not, but he did manage to generate a lot of negative publicity for Thailand. Although nobody in the Thai government has verified the connection, it is highly believed to be the straw that broke the camels back.

That resulted in changes to tourist visas on arrival. You could only stay 90 out of every 180 days with this type of visa. This was countered by visa run services taking people to the nearest Thai Consulate in neighboring countries to get a 60 day visa with the option of extending it to 90 days. If you played the numbers right you could still manage to stay in Thailand on a tourist visa with perhaps needing to take a few days holiday in another bordering country.

The next change was reducing the visa on arrival to 15 days if you entered Thailand by land. If you arrived by air, then 30 days was still available. This only made it more of a pain in the ass and did little to slow the flow.

Now as of June 1, 2009 you can only enter by land for 4 consecutive times before you are denied entry. If you fly in you can stay for 30 days. As this has just been implemented, it is too soon to say how this will pan out.

There could be some political motivation with this clamp down on tourists. The teacher incident in 2006 happened while Thaksin Shinawatra was still prime Minister. However implementing the first phase came on October 1, 2006 after the September 19, 2006 coup that ousted Thaksin. Thaksin was seeking what was called quality tourists. What that simply meant is fat wallets. The infrastructure was being build around depositing tourist in and around over priced stores. That did leave some baffled as to why someone would fly all the way to Thailand, just to buy things at the same price as where they came from. After all Thailand is known for being inexpensive.

With Thailand struggling for tourists after the one two punch of the global economy, and the political wars that cause the main airport to be closed chasing away hoards of tourists at the start of high tourist season, one can not help but wonder if this is politically motivated to make the Abhisit government look bad. The average Thai does not care too much about what type of tourist visa brings money into Thailand, and seeing as pickings are very slim, it can quickly turn public opinion against Abhisit. Once again the question is raised as to who is making the calls on the visa requirements.

The people on tourist visa that are being targeted are people who live in Thailand and have moved from the tourist economy to the general economy. They have apartments and many small Thai businesses have started to support them. That money in turn finds its way back to rural Thailand one way or another, and not into the pockets of the elite that own the overpriced stores in Downtown Bangkok. Also a non Thais spends many times the amount of money a Thai would. So in short 1 non Thai can spend 10 to 50 times what a Thai does. Many non Thais that live in Thailand may be too young for a retirement visa, and are forced into the tourist visa option.

No matter how you look at it, the timing is horrendously bad for this latest change in visa requirements, and Connecting the Dots strongly feels there is political motivation behind this.