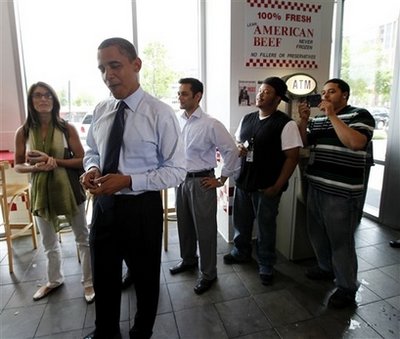 No matter where you go on this planet it seems, you will see people making a personal Connection with US President Obama. When you come and think about it, what US politicians have failed to do over they years, seems very natural to a person who calls himself a mutt.

Everyone loves a salad bar that has a lot of items to pick from. A little of this, some of that, and oh my what have we here! We find it easy to create a salad we like. Because of that huge selection, very few if any people go away disappointed. It is the same when it comes to politicians, we elect based on what we like.

Even before the November 2008 elections that sent Barack Obama to the White House, the world was connecting with him. That is because they saw in him themselves. From the dusty roads in small countries, to the billboards in huge cities in Europe and around the world, pictures of Obama were appearing.

Even after the election, the world saw President Obama sitting at a state dinner one day, and ordering a burger the next. When people saw that, they knew what they saw on the election trail was not just a show to get elected, it was the real deal. People were saying Obama is like us, he understands us, he knows our problems, and he can help us. That was not said in the USA alone, but all around the world with people of different countries and faiths. With that said, Obama has become the key that will line up all the tumblers in the lock allowing the door to the future to open.

Opposition to President Obama’s popularity leaves the opposing people looking way out of touch with what the world wants. A rare audio tape from Osama Bin laden that was released on the day President Obama went to Egypt to address the Muslim world signals that Osama Bin laden is worried. He is worried about the overwhelming influence President Obama has. What was said on that tape was very clearly designed to place doubt in Obama, however it was read as fear of Obama’s influence in the Muslim world. That was supported by what people were seeing with their own eyes does not match what Osama Bin laden said on the tape.

On a more domestic front Republican Newt Gingrich tried to discredit Obama by saying he was not a citizen of the world, being totally opposite of what Obama said in his speech in Egypt. That comment by Gingrich at a Republican party fund raising event was greeted with a very hollow applaud. That hollow applaud spoke louder than words, Newt is out of touch with the world.

The us / them mentality that has dominated US politics under the Bush administration should have been tossed out at the same time the Blacks only Whites only signs came down in the 1960’s.

President Obama has been gifted with the ability to connect with everyone and bring the world together. To the vast majority of the people who inhabit this planet, this is what they want to see. As for the extremists who spread hate and fear, Obama is a person that must be eliminated.  Before we bask too long in the abilities of President Obama, we must be aware that the efforts of extremists will be doubled to try to assassinate President Obama because he is a very clear threat to their ways.

« Dealing with the Taliban By-election may end Thaksin »