Winds of change in Iran 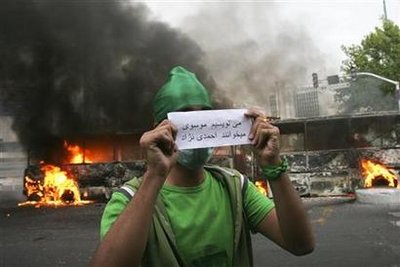 The political events in Iran reach far beyond the borders of that country. In fact what happens there will set the stage for the rest of the world for the next several years. The question is what direction will the winds blow.

As the news and information from Iran at best is bits and pieces, it leaves us only to look at the bigger picture, and the dots with that are very clear. The winds of change are blowing strong in Iran, the question is are they strong enough to blow down the house of old school thinking.

One phrase has stood out over the past week or so in Iran, and that phrase is young people. It is the young people who are growing tired of what is coming out of the government. They are tired of hearing about hate and denial of events. Many are no doubt ashamed of how their country looks to the rest of the world because of their leaders. This feeling of being ashamed of how their country lookes by the action of their leaders is not unique to Iran, the US just finished 8 years of the same.

The fact that young ideas and moving to be more part of the global community and living in harmony is a wonderful appealing idea. This is no doubt being fed from the Internet and travel outside of Iran. Only completely isolated countries like North Korea show no change as there is no access to the Internet or outside influence.

The fact that the Iran government pulled the communication plug on the rest of the world being no phone or internet, strongly suggests the movement of change is far stronger than the government publically wants to acknowledge. If the numbers are correct based on the 2 to 1 win for the old government, the action of stopping communication is overkill. It is simply a tactical move to divide and conquer. Any comments beyond that at this time are pure speculation.

Based on what is known, this appears to be a repeat of the Philippines when Marcos rigged the election. What is unknown is what the outcome will be. If the opposition or reformists are but a small vocal minority, then the election results must be accepted.  If in fact they are a majority, then change must be accepted. Seeing that the total population of Iran is around 71 million, and the 80%+ turnout, suggests the published 2 to 1 numbers are false. People must be motivated to go out in those huge numbers.

The young ideas routing out the old is nothing new. In fact it is part of change. There is always some effort to suppress the young and new ideas, and how that is done is different in each place. But the simple fact is change is unavoidable. The young will outlive the old unless they are brutally suppressed like in Burma. But the fact is eventual change will happen.

The uprising in Iran actually tends to put a good face on Muslims as they internally look to rout out the extremists clearly saying their views are not acceptable to Muslims. The same is true in everyplace that has to deal with the Taliban. This is even true in the Catholic religion as more and more catholics see the church as outdated and not in touch with reality.

The bottom line is what is going on in Iran is significant to everyone and it will change how the world sees today’s young Muslims as a whole.