Supernova in the neighborhood 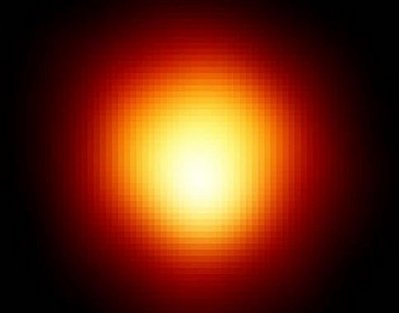 The word Supernova is a word that any astronomer or space program fan is familiar with. The ones we have seen have been far away. But there is a chance one nearby has happened and the light has not yet arrived at earth. The interesting thing is most everyone has seen this star in the night sky.

When it comes to stars there are big, and then there are BIG. This particular star who does not go by the alias Michael Keaton is about as big as the orbit of Jupiter.  In other words it takes light 288 minutes to orbit 1 time, as compared 0.29 of a second for Earth. Add to that it is only about 430 light-years away, and we will have a ringside seat when it blows. The name of the star is Betelgeuse and it makes the left shoulder point in the constellation Orion.

Considering that we can see supernovas 75000 light years away, and even in other galaxies with telescopes, this one will be hard to miss. It is suspected that the biblical star that lit the night sky around the birth of Jesus was also a supernova, and there has been some research along those lines to verify that.

As for how bright this supernova will get depends on the time of the year. If the star is in the night sky it could turn night to day and you would have a shadow. If it is in the day sky, we will have 2 suns. That could last from days to a month or more.

How that will effect what electronics we have in orbit is unknown as there were not a lot of electronics around in the year 0. But what may come after the shine may be far worse, as what remains may collapse into a black hole and start to nudge things around our solar system.

WASHINGTON (AFP) – A massive bright reddish star in the Orion constellation has mysteriously shrunk by over 15 percent in the last 15 years and astronomers have not yet determined why, according to a study released Tuesday June 9.

Betelgeuse, considered a supergiant star, is so large that it would reach to Jupiter’s orbit in our solar system. But at a radius of about five astronomical units, the star has shrunk in size since 1993 by a distance equivalent to Venus’s orbit.

“To see this change is very striking,” University of California, Berkley professor Charles Townes, who whon the 1964 Nobel Prize in physics for inventing the laser, said in a statement.

“We will be watching it carefully over the next few years to see if it will keep contracting or will go back up in size.”

According to Townes, the star’s size diminished “smoothly, but faster as the years progressed.”

The findings were presented Tuesday at a meeting of the American Astronomical Society in Pasadena, California, and were based on readings collected at UC Berkeley’s Infrared Spatial Interferometer (ISI) atop Mount Wilson in Southern California.

Edward Wishnow, a UC Berkeley research physicist who worked with Townes on the study, said the researchers did not know why the star was shrinking.

“Considering all that we know about galaxies and the distant universe, there are still lots of things we don’t know about stars, including what happens as red giants near the ends of their lives,” Wishnow said.

Red supergiant stars are suspected to explode into type-II supernovas, cosmic explosions due to a massive star’s internal collapse.

Townes observed a bright spot on the star’s surface in recent years, although the star appears spherically symmetrical for now.

Betelgeuse, which is among the eight brightest stars in our sky, was the first to ever be measured and is still only one of a handful of stars that appear as a disk rather than a point of light through the Hubble Space Telescope.

Despite Betelgeuse’s diminished size, Wishnow noted that its visible brightness had showed no signs of significant dimming over the past 15 years.

📂This entry was posted in Space