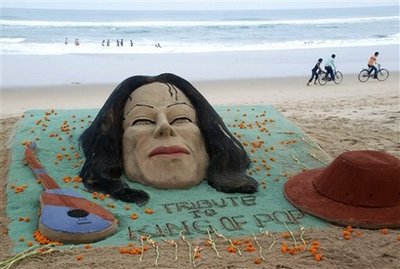 The list of entertainers is very short that can reach inside someone and become part of their lives. And is seems most all of them have met a tragic and premature fate. We now add the Name Michael Jackson to that list.

Thinking back to that short list of names that spans three decades we start off with Elvis Presley who died as a result of prescription drugs. His music was the bridge between generations and even shaped American culture.

Then there was John Lennon who was murdered. His music touched the hearts of many and still brings tears to the eyes of young people who never knew him.

Then there was Selina who was also murdered. Although she was not as widely known because her career was just launching, she was bridging the gap between Spanish speaking and English speaking cultures and looked to be as big and popular as Madonna. Her music reached in and touched your deepest emotions.

And now we add Michael Jackson to that list. Putting aside his personal problems, his music and talent was known around the world. But this story is not about Michael Jackson, it is about the reaction to his early passing and his influence on people.

Because of that connection people had with Michael, slowly parts of their lives somehow connected with his music. A song became that reminder of a person or an event in their lives. It did not matter what country you were from, it all was the same. The bridge was complete between cultures. Beyond culture there is emotion that is universal, and that is where Michael Jackson’s music worked its magic. Love is love, sadness is sadness, it does not matter who you are or where you were born.

The sudden and spontaneous outpouring with the news of Michael Jackson’s death from around the world clearly says, his positive contributions greatly outweighed negative allegations of events in his personal life. In some places there is shock and mourning. In others there are huge spontaneous block parties in celebration of his music and his life and how his music touched people. You can find this in countries on every continent around the globe. One of humanities emotional anchors was gone.

With each and every person that grieves for the death of Michael Jackson, they do so because somehow and someway he significantly touched their lives. To many people he was like family and the loss feels as such.

It is a rare event when US network evening news contributes nearly its entire broadcast to a single event. Even more rare to do it two nights in a row. Michael Jackson is becoming that and more. That simply shows us our human side is still in need of comforting in all the turmoil around the world. Many people find strength in music, and there is no doubt Michael’s music contributed to helping people during tough times. It is this deep bond that now has somehow been ripped from the souls of many leaving exposed emotions for the world to see.

The feeling that each has when someone who has touched their lives passes, leaves us somehow empty and exposed. That feeling of a comforter who will no longer be there when we need him is what we now feel. It is this that is the true story. It also shows us that positive influences do so much more than negative influences as people seem not to care too much to talk about the negatives Michael Jackson had in his life. Nothing is perfect so we must accept our flaws, and grow our positives to make the world a better place. This is what we are seeing around the world as people mourn in their own way the passing of a King.

📂This entry was posted in Shining Star

One Response to Michael Jackson the reaction