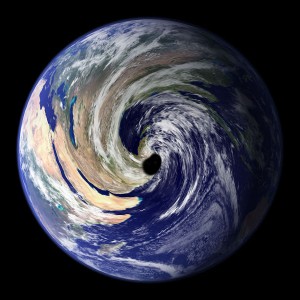 With all the problems we are having at the moment with the economy, global warming and assorted flu strains that kill floating about, we have no need for another problem like creating a black hole. But when it comes down to it, that may be what is next.

With all the things we have learned about a black hole during recent years, if there is anything we have learned it is they are best viewed from a distance. To even remotely float the possibility that the Hadron Collider has the muscle to create a black hole sends chills up the spines of many. The best way to put it is this is not opening Pandora’s box, it is creating it.

There are scientists that say that if a black hole is created, it will only last a fraction of a second. However this is just a guess. There are those who say the black hole will stay and start dining on the Earth.

With that said here is what we do know about a black hole. First we have never seen one end so to assume that any black hole we create will only exist for a short time is not supported by any evidence we have found, or has been made public. The second thing is other than the huge gravitational hole it has, what is busy getting sucked in is making a lot of noise across the entire spectrum from x-rays to whatever. In short there may be enough radiation and heat generated to liquify everything around the black hole for miles around as matter starts to orbit inward to the black hole. After all we can see this from thousands of light years away, so there is a good possibility of this happening here. If that is the case the black hole will feed and grow very fast.

The next thing is the Earth’s axis would change to be centered around the black hole as Earth is consumed. That would quickly put an end to life on Earth as conditions would be too extreme as all the atmosphere will have been sucked in by then. The earth would look like an out of balance tire orbiting the sun.

next on the menu would be the moon as it slowly starts to spiral into the black hole. If that was not bad enough, smaller things like comets and asteroids would alter their orbit around the sun and that would be the start of the end of the solar system as the sun’s gravity finds a rival.

How long all this will take is hard to say as it depends on how much gravity the black hole has. If it is a minimal black hole with just enough gravity to trap light, then it May take a few months to finish off the Earth. If it is much more powerful then it could be just a week or so.

On another thought, as we continue to look into space in the search of other life, the life we find that is more advanced that our own most certainly did not create a black hole. Creating a black hole would most certainly be the ultimate Darwin Award.

📂This entry was posted in Space Technology

4 Responses to Black hole on Earth