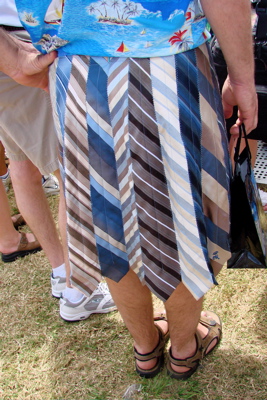 In the world of fashion and what is in style, it would appear the day of the necktie is drawing to an end. For the tie haters out there, that day can not come too soon.

The origins of the neck tie are a bit of a mystery. Some rumors have it that some tailor years ago had a bit of cloth left over, and being money conscious decided not to throw it away and figured out a way to sell it. Another rumor was the necktie was created as a cover story for a drunken accident between two friends. One of the two was so drunk he fell down face first and ended up with a bloody nose that would not stop bleeding. So in a totally drunk ingenious move, his friend tore a strip of cloth from his shirt and applied a tourniquet around his neck to stop the bleeding. In the morning when his friend woke and found him dead, the cover story of a fashion accident was created to avoid arrest for murder. There are several other rumored starts but these two seem to have the most credibility.

So now we come to the argument that some how wearing a tie makes you better than others who don’t. Well if you go into a factory you will find the people who are not wearing a tie are the ones who know what they are doing in most cases. The people with ties just walk around with clipboards trying to look important.

The bottom line is less and less companies are making it mandatory to wear a tie. The term business casual is relatively new in the English language. That simply means no jeans or T-shirts. Even President Obama has set a dress code for the White House that if you have to work on the weekend, business casual is fine.

This trend is clearly moving towards comfort, and unless you are the person who feels absolutely naked if you are not wearing a tie, the world is moving on without you. For those people the tie seems to act as a pacifier or security blanket to cover up some perceived personal flaw. In fact when it is mid summer and absolutely scorching outside and you spot someone wearing a tie outside, they actually look foolish as if to invite heat stroke. So wearing a tie does not make you look smarter.

In the state of Connecticut there is a bar that the dress code is no ties allowed. If you wear a tie inside they will ask you to take it off. If you don’t they will come over and cut it off and then use a staple gun adding it to the collection on the wall. Needless to say there is a movement against ties.

As for how a tie looks with a suit, well the term suit and tie applies. They are two separate things. So wearing a suit without a tie is just fine. Remember the tailor theory of how the tie was invented.

So the bottom line is if you don’t like to wear a tie, then don’t. There is far less resistance to not wearing a tie than there was just 5 years ago. It appears the new century has arrived, and ties appear to be going the way of undershirts as a useless article of clothing.

📂This entry was posted in Satire

One Response to Tie tired