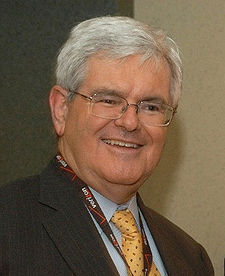 The name Newt Gingrich has not been in the news much over the last decade. In fact it was not since the last time a President had a go at doing something about healthcare. It certainly seems to be more than a coincidence that this expert at making unfounded statements is back in the news.

Back when Newt Gingrich was Speaker of the House, he would often make statements that sounded absolutely credible, but also had absolutely no basis in reality. In fact the same type of statements seemed to have fired the heated Town hall debates on healthcare. People are absolutely up in arms about things and provisions that do not exist. As far as Connecting the Dots is concerned, if there was ever a bold line between two dots, this would be it.

Newt for the most part is credited with leading the attack at then President Clinton, and healthcare was one of the things Newt Attacked. With credible sounding statements that sent the media scurrying off to see what Newt was talking about, the media was often left quoting Newt but not being able to verify the story. So it was often left as “Newt Gingrich said….” and that was enough to distort things.

The reason Newt is back is very clear, President Obama has enough votes to pass healthcare along party lines. The republicans simply are playing politics with healthcare trying to damage President Obama and the democrats as they think ahead to the November 2010 elections.    If healthcare reform is passed in the next month or so, Americans will have had a chance to give it a test drive and make their own accurate evaluations. The later the reform is passed, the less chance Americans will have to do a proper assessment, and more distortion could be applied by Newt and company.

In reality healthcare reform is long over due, and the fact that some older Americans are choosing death over passing the back breaking financial burden of out of the pocket healthcare to their children says a lot. Because at the time of writing this entry the particulars of President Obama’s plan have not been ironed out, we can not pass any judgment except that change is needed. The need for change was a big part of what got President Obama elected. The idea of affordable healthcare is truly a dream of every American in today’s world, and for the republicans playing politics with peoples lives just has a bad taste all the way around.

Newt has been out of touch with Reality it would seem based on how he was received by some moderate republicans in recent weeks, and for him to be seen back on stage in any frequency says that the republicans are also out of touch with the people of America. To resist the needed change and to spread false information to stop the needed change is really what is going on. Republicans seem only to be interested in keeping the status quo.

📂This entry was posted in Health Politics United States

One Response to Republicans bring out distortion experts