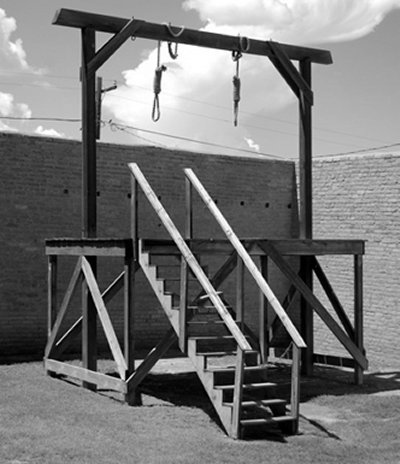 Bombshell or assumption, some hints are starting to emerge that there are serious charges being kept secret in relation to the April riots by Thaksin supporters. For whatever reason, and there are certainly several valid ones, there may be a sudden run on rope and trap doors coming up in the future.

By no meas is Connecting the Dots saying this is true or false. What we are saying is some of the signs that suggest it is true are starting to be seen. What we are talking about is charges of treason that can carry the death penalty.

To be frank, the actions of Thaksin supporters and Thaksin himself most certainly met the terms of treason on more than one occasion and we made a point of pointing that out. However we were very surprised when some lesser charge was leveled against the perpetrators.

With looking at the meat of what is being said, and the extreme measures now being regularly taken by the government to keep Thaksin supporters under control, it is hard to justify such a response unless there was extreme risk to the country and overthrow of the government from within, and that meets a requirement to be called treason.

About one in three people expect the political turmoil to persist and escalate while one in four see little chance for reconciliation, Suan Dusit Poll said in a survey released yesterday.

About a third of the 1,256 respondents say they have now got used to the political landscape dominated by street protests.

Prem admitted last week that he had warned former premier Chavalit Yongchaiyudh to act with prudence before joining the Pheu Thai Party, as he could risk being accused of “betraying the country”.

Meanwhile, Prime Minister Abhisit Vejjajiva warned the red shirts that they would not be allowed to rally at the meeting venues of the Asean Summit in Hua Hin and Cha-am.

Abhisit was reacting to remarks by red-shirt leader Arisman Pongruangrong who said on Saturday that he was planning to submit a statement to Asean leaders voicing concern over the “brutal crackdown” on protesters at last April’s summit in Pattaya.

“The April mayhem should serve as a lesson and all parties concerned should try to let the country move forward instead of stirring up trouble,” Abhisit said.

The venues for the upcoming summit will be placed under the Internal Security Act, he said, pointing out that protests are banned.

He said authorities might enforce additional measures and increase the deployment of security forces.

With regard to the investigation into the spread of rumours that caused havoc in stock prices, the prime minister said the stock market regulators were working with the police to unmask the rumour-mongers.

He urged investors to act with calm based on verifiable facts instead of falling prey to rumours.

He agreed that the sharp drop in stock prices was unusual. He said stock market regulators were obligated to get to the bottom of the matter to explain and pre-empt the market jitters.

The stock market has yet to determine whether there were attempts to manipulate prices, he said, refusing to speculate about the alleged involvement of a foreign stock broker in triggering the panic.

Meanwhile, about 1,500 security forces have remained on guard at Government House as precaution although the red shirts voluntarily dispersed late Saturday night.

The red-shirt rally proceeded and ended in a peaceful manner without reports of any offences, Metropolitan Police spokesman Colonel Piya Uthayo said.

As of yesterday morning, all roads around the rally site had been reopened, he said.

He reminded parties concerned that the Internal Security Act will remain in effect in the surrounding areas of Government House till October 25.

So looking at the reasons why treason charges have not been filed, the biggest and most obvious is getting Thaksin back as it most certainly would complicate things where extradition is concerned. If treason charges were filed then short of bounty hunters hunting him down and bringing him back hogtied in the trunk of a car, Thaksin would not be back.

Another reason is to promote reconciliation, so to say we will not charge you with treason if you behave is another valid reason and tends to be the Thai way about dealing with things.

There are other minor reasons but for the most part those are the major two. Whether the charges are actually brought will depend entirely on how much damage was done as no doubt Thais do have their limits in patience.

« Got Seven? Being overprotective is harmful »