Swiss say no to Muslims 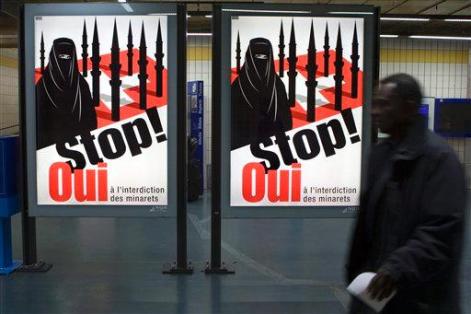 In voting results that can only be described as an eye opener, nearly 2 out of 3 Swiss said no to the visual expansion of the Muslim faith. Simply Switzerland has voted to prohibit the construction of new minarets but they can still build mosques.

This will certainly tweak some interesting conversations and reactions. Unfortunately and ironically every threatening and angry response from Muslims simply justifies the vote outcome.

Of you were to take every religion small or big and assign a personality to it, the Muslim religion would simply be the bully in the bunch. It does not take much digging to find news stories that are disturbing tied to the Muslim faith, and you can exclude terrorism in that search.

Applying Muslim rules and punishments to non Muslims is most likely at the heart of this along with a few other intrusive things associated with the Muslim faith. Not to say it will happen every place, but the underlying logic in the Swiss vote is ‘lets not find out.’

November 30, 2009
“A 16-year-old Christian girl from southern Sudan said Friday she was lashed 50 times for wearing a skirt deemed indecent by authorities in the north who enforce a strict version of Islamic law.

Silva Kashif said she was arrested by a plain-clothed policeman in a Khartoum market last week for wearing a skirt beneath the knee. She was convicted of offending public morality and received 50 lashes in the courtroom.

I was treated like a criminal,” Kashif said in a telephone interview. ‘I am confused what to wear. The trousers were an issue. My skirt was beneath the knee. What more can I do? I am Christian. My tribe and my customs permit me to dress like this.’ ”

The tender mercies of Allah…

Followers of Islam aren’t content to be enslaved by their religion, they seek to bring everyone under the bondage of the religion of peace.

In most Muslim countries women are treated like chattel, and they risk being flogged if they aren’t covered up from head to toe.

In Sudan indecency laws aren’t supposed to be applied to non-Muslims, but the police don’t care if the rights of infidel dogs are violated.

It’s not just in Sudan where Muslims are seeking to bring non-Muslims under their dominion, Americans also need to be on guard against this militant religion.

Islamic countries are pushing for an international ban on “blasphemous” treatment of religious beliefs and symbols. President Obama, to his credit, has spoken out against this assault on freedom of speech. It’s an insidious movement in reaction to the cartoons depicting the prophet Muhammad that were published in Danish newspapers a few years ago.

I am not a Muslim, and I don’t have to genuflect before a prophet I consider a bloody tyrant. It will be a cool and breezy day in hell before I censor my words out of fear of offending the gods of political correctness and Muslim tyranny.

In other parts of the Muslim world, the stoning to death of people who break religious laws is still common and in some places expanding. It is difficult to feel comfortable with a religion who enforces with violence. For the most part, the rest of the world has moved past that, and that certainly was also reflected in the Swiss vote.

The bottom line seems to be a message to Muslims in an increasingly populated world. Comfortable physical distances between faiths is becoming more difficult to achieve. The ‘Leave them be and they wont bother us.’ teaching from our parents is becoming obsolete as the global population nears 7 Billion people. We are now in each others way and the intolerance some Muslims have to others simply is the reason the vote was 2 to 1 to stay away. There is a clear signal to the Muslims about cleaning up their own house before coming to ours.