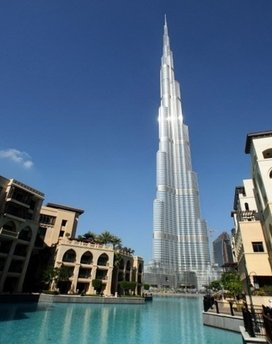 There it is, standing taller than any other structure in the world. Right in the middle of a place that can not pay it’s bills.

Spending money is what makes the world go round. And things that are unique tend to draw attention. Unfortunately as a person looks at this huge building in a part of the world that oil comes from, one can not help but wonder their own personal contribution to this tower when standing at the pump filling their car.

DUBAI, United Arab Emirates – Dubai opened the world’s tallest skyscraper  Monday January 4 in a blaze of fireworks, then added a final flourish: It renamed the half-mile-high tower for the head of neighboring Abu Dhabi, whose billions bailed out Dubai amid last year’s financial crisis.

Long known as Burj Dubai — Arabic for “Dubai Tower” — the building rises 2,717 feet (828 meters) from the desert. The $1.5 billion “vertical city” of luxury apartments and offices and a hotel designed by Giorgio Armani also plans to have the world’s highest mosque (158th floor) and swimming pool (76th floor).

Its backers wanted the skyscraper to be a monument to the boundless, can-do spirit of Dubai — one of a federation of seven small sheikdoms that make up the United Arab Emirates — but the timing could not be worse. Property prices in parts of Dubai collapsed by nearly half in the past year, the result of easy credit and overbuilding during a real estate bubble that has since burst.

Riding to the rescue was Sheik Khalifa bin Zayed Al Nahyan, the ruler of oil-rich neighbor Abu Dhabi, which pumped tens of billions of dollars into Dubai last year as it struggled to pay enormous debts.

As officials opened the tapering metal-and-glass spire with fireworks and multicolored lights, they unexpectedly announced it would be renamed Burj Khalifa, to honor the Abu Dhabi leader who is also president of the UAE.

Thousands of cheering, clapping spectators watched as a tally projected on huge screens at the opening ceremony revealed the tower’s most closely guarded secret — its height of 2,717 feet. That made it more than 1,000 feet higher than the skyscraper known as Taipei 101 in Taiwan, which at 1,667 feet had been the world’s tallest since 2004.

The tallest building in the United States, the Willis Tower in Chicago, comes in at 1,451 feet. Before they were destroyed in the Sept, 11, 2001, attacks, the World Trade Center towers both topped 1,360 feet. The Freedom Tower being planned for the site will measure 1,776 feet, with completion estimated in 2013.

The exact number of floors for the Burj Khalifa is not known, and could reflect how the developer chose to calculate the total.

Mohammed Alabbar, chairman of the tower’s developer Emaar Properties, initially said Monday it had “more than 200” stories, but he later backtracked to more than 165 inhabitable floors, given its tapered top. Promotional materials sent before the tower’s opening said it contained 160 stories.

Developers say they are confident in the safety of the tower, which is nearly twice the height of New York’s Empire State Building.

Greg Sang, Emaar’s director of projects, said the Burj Khalifa has “refuge floors” at 25 to 30 story intervals that are more fire resistant and have separate air supplies in case of emergency. Its reinforced concrete structure, he said, makes it stronger than steel-frame skyscrapers.

“A plane won’t be able to slice through the Burj like it did through the steel columns of the World Trade Center,” he said.

Dubai has not been a target of terrorist attacks or threats that have been made public.

The tower was designed by Chicago-based Skidmore, Owings & Merrill, which has a long track record in engineering some of the world’s tallest buildings, including the Willis Tower.

Ahmed Elghazouli, a professor of structural engineering at Imperial College London who was not involved with the Burj’s construction, said such groundbreaking buildings typically employ some of the world’s best engineers, and go through more rigorous testing and require more studies during design than standard towers.

“I have no doubt that it has been looked after very well in terms of design and construction,” he said when asked about the building’s safety. “I would be much more comfortable getting into a building like this knowing that so much background work has gone into it.”

Dubai was little more than a sleepy fishing village a generation ago, but it boomed into the Middle East’s commercial hub in the past two decades on the back of business-friendly trading policies, relative security, and vast amounts of overseas investment.

With little oil of its own, Dubai relied on cheap loans to pump up its international clout during the frenzied boom years.

But like many overextended homeowners, the emirate and its state-backed companies borrowed too heavily and then struggled to keep up with payments as the financial crisis intensified and credit markets froze up.

The sheikdom shocked global markets last year when it unexpectedly announced plans to reorganize its main state-run conglomerate Dubai World and sought new terms in repaying some $26 billion in debt. It got some aid from Abu Dhabi’s bailouts.

Dubai’s hereditary ruler, Sheik Mohammed bin Rashid Al Maktoum, in recent months has increasingly spoken of the close relationship between the two emirates, declaring in November that “Dubai and Abu Dhabi are one” and will “be there for each other.” Sheik Mohammed serves as vice president and prime minister of the UAE federation.

Analysts had questioned what Dubai might need to offer in exchange for the financial support it received from Abu Dhabi, which controls nearly all of the UAE’s oil wealth. Abu Dhabi provided $25 billion last year as Dubai’s debt problems deepened.

“It’s really quite remarkable to have to name your biggest and most memorable landmark after the living monarch of a neighboring emirate,” said Christopher Davidson, a professor at the University of Durham who has written extensively about the UAE.

Burj developer Emaar is also partly owned by the Dubai government, but is not part of struggling Dubai World, which has investments ranging from Dubai’s manmade islands and seaports to luxury retailer Barneys New York and the ocean liner Queen Elizabeth 2.

Emaar’s Alabbar said the landmark Burj is 90 percent sold in a mix of residential units, offices and other space, offering a counterpoint to Dubai’s financial woes.

At their peak, some apartments in the Burj were selling for more than $1,900 per square foot, although they now can go for less than half that, said Heather Wipperman Amiji, chief executive of Dubai real estate consultancy Investment Boutique.

Amiji said some buyers may struggle to find tenants at going rates once the tower’s expected high service charges are factored in.

The building ranks as the world’s tallest structure, beating out a television mast in North Dakota.

Early designs for the Burj had it edging out Taipei 101 by about 33 feet (10 meters), said Bill Baker, the building’s structural engineer.

“We weren’t sure how high we could go,” said Baker, of Skidmore, Owings & Merrill. “It was kind of an exploration … a learning experience.”

Work began in 2004 and moved rapidly. At times, new floors were being added almost every three days. During the busiest construction periods, some 12,000 people worked at the tower each day, according to Emaar. Low-wage migrant workers from the Indian subcontinent provided much of the muscle.

The Burj is the centerpiece of a 500-acre development that officials hope will become a new central residential and commercial district in this sprawling and often disconnected city. It is flanked by dozens of smaller but new skyscrapers and the Middle East’s largest shopping mall.

That layout — as the core of a lower-rise skyline — lets the Burj stand out prominently against the horizon. It is visible across dozens of miles of rolling sand dunes outside Dubai. From the air, the spire appears as an almost solitary, slender needle.

An observation deck on the 124th floor opens to the public Tuesday, with adult tickets starting at 100 dirhams, or just over $27 apiece. The ride to the top took just over a minute during a visit for journalists Monday.

Dubai landmarks like the sail-shaped Burj al-Arab hotel and the manmade Palm Jumeirah island were visible through the haze.

The Burj itself cast a sundial-like shadow over low-rise houses and empty sand-covered lots stretching toward the azure Persian Gulf. ﻿