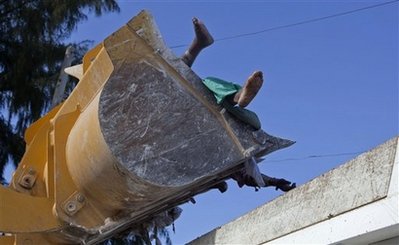 It is hard not to feel a sense of sadness when some act of nature brings an abrupt end to the lives of thousands of people. It is even sadder that some places tend to be in the bulls eye more often that others. Haiti is one of those places.

Haiti as long been described as one of the saddest places on earth. Reeked by Hurricanes, mud slides and other major natural disasters, it would seem this extremely poor country is frequently nature’s punching bag. Life is hard to begin with in Haiti even before an angry mother nature comes to pay a visit.

But this story is not entirely about Haiti, in fact in a few days some other major event will put Haiti off the front page, and slowly the Haiti earthquake disaster will start working it’s way to the back of the newspaper. Unfortunately that is the way it is.

The 8.0 earthquake in China, the 9.0 earthquake and Tsunami in Indonesia all still scar people today, but are now only mentioned on anniversary dates because of the memorial events. Between those two Asian earthquakes, roughly a quarter of a million people died. Considering there are roughly 45 countries who’s entire population is less than that, dropping that from the news is a reminder how frequently things head south.

One such non earthquake example was Cyclone Nargis that killed and estimated 138000 people. So if you add the death toll of just these 3 acts of nature, the number 400,000 becomes very close to the mark.

As it would be earthquakes and Tsunamis are not part of global warming. The same is true with volcanos, but we have learned to get out of the way of those super zits when they blow. That is at least the people that understand Darwin’s theory. But earthquakes are yet unannounced.

There has been some success in predicting earthquakes in some situations. When an earthquake happens, stress points change along the fault line. When the new stress points are calculated the next earthquake location is roughly known, but timing is still very pot luck.

However Haiti is more than one of the saddest places on earth, they are essentially a template for what is coming for the rest of us. Haiti never seems to have a chance to fully recover from one natural disaster before another one hits. The geographical location puts Haiti right in the middle of Hurricane alley. Being so impoverished there is no funds to properly rebuild and upgrade infrastructure.

As the destructive severe weather from global warming increases in strength and frequency, more and more countries will go broke trying to keep up. Other Caribbean countries, The Philippines, Japan, Bangladesh, Burma, Mexico, Central America, China and the east coast of the US are all due to get hit frequently.

So when you look at Haiti, you see what is coming. It also leaves people to wonder just how much more Haiti can take as things get worse. If there was ever a crystal ball that could gaze into the future of what life will be like once global warming gets up to speed, Haiti would be that crystal ball.