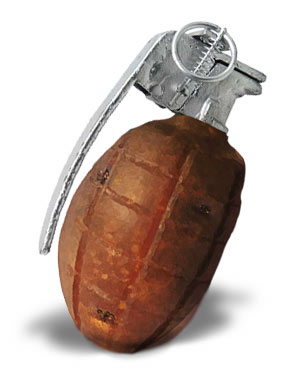 It can be amusing to watch how hot potatoes are handled in Thailand. When someone who is influential gets called onto the carpet, things tend to go fast. But when the time comes to render judgment be it penalty or getting cut loose, things come to a crawl and it is like being in a hurry while walking behind a fat woman who is shopping.

With the Abhisit government coming down hard on corrupt politicians, the chances of a powerful corrupt politician getting called out go way up. And eventually someone will need to give a thumbs up or down with jail time as a possible outcome. For many Thais who are not yet sure about the strength of the Abhisit government and how long it will last, being the one to say guilty is like sentencing The Godfather.

In Thailand many people are in positions of power not from their personal achievements, they are there because of who they know. When you consider that fact, stepping on a person who helped you get your job may be the same as putting a loaded gun to your head and pulling the trigger.

What has been seen is court judgment dates that were thought to be locked in suddenly get extended for whatever reason. The reason given to the media is new evidence or some other story to that effect. The same sort of delays and passing the buck are common in all places of authority.

This does cause rumors to be spread mostly being a payoff for a favorable finding and judgment. But in some cases they delays may be absolutely legitimate as someone who had cold feet finally came forward with evidence. So with that Connecting the Dots does not want to make a call just yet as clearly each situation must be looked at on its own merits.

Because the judges have been asked to explain their rulings well, it should be fairly easy to spot a payoff. The first indication of a payoff will be when you have a sudden desire to bang your head against a wall on a seemingly no brainer ruling that is wrong. That was a common feeling before the 2006 Coup that unseated Thaksin. After that things smoothed out and the Thai courts started getting more respect around the world unlike the courts in Burma.

So based on the length of delay, you can get a fairly good feel as to how influential an accused person is. On the same note how dangerous it is to have them face justice if you are not insulated.