With a sudden change in climate, we simply will not have time to compensate for food production. Crops will suddenly fail and near global famine will set in quickly perhaps in months.

It will also be a few years before we can recover and figure out what to do. That will quickly be followed by the end of fresh water as what is left of snow and glaciers will just vanish. 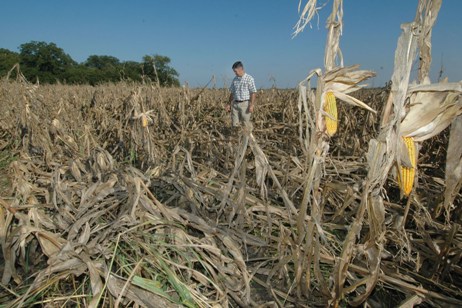 With food and fresh water in scarce supply you can quickly see how fast anarchy is likely to set in with the poor countries being first. Society will collapse as our survival instincts take over. The argument that this will not happen is based on a gradual climate change, and we would agree with that assessment. But enough evidence or more correctly dots strongly suggests sudden change will be the reality every creature on this planet must face.

Other weather examples include the Atlantic Hurricane season that runs from June to November. When a conditional tipping point is reached about Mid August there is an explosion of activity where 75% of the storms happen inside a 50 day window. The only thing that causes that is the conditions. So keep in mind the sudden change in climate will be part of a cascade of events. So that 50 day window may suddenly become a 120 or more day window in just 1 year and not expand over decades.

In the north Atlantic, once the engine that drives sea currents stops, sea levels will rise several inches a year not giving time to relocate or protect coastal major population centers. In fact it may be preferred that major population centers be away from the sea seeing that regular category 6 storms are beyond what we can endure. Picture a category 3 or higher Hurricane making landfall on the east coast of the US every 10 to 20 days and you can get a feel for what is coming.

Connecting the Dots is not looking to set panic into motion, we are simply connecting the dots as we see them. It is unfortunate that is what they show, but when you test logic to this as we have several times before composing this you will find it hard to disagree.

This is not like a growing plant that you can predict gradually getting bigger. Weather predictions are getting better but still are fairly inaccurate past 72 hours. So imagine what happens when the standards and expected normals go out the window. All they will be able to say is conditions are right for severe weather 24-7.

We have talked about having children based on want or need, and to give careful consideration what awaits them. Perhaps it is better to never be born rather than to face what is coming.

Once rapid change sets in there is little a person can do for themselves other than to hoard and do their best to survive. There will be no riding it out as it is likely to continue for hundreds of years. Unfortunately when it comes to mother nature, we are at her mercy. We may have some small successes like blocking a flood with a community effort of sandbagging, but that was just mother nature flexing her muscles. This will be like mother nature finding out father nature has been out messing around.