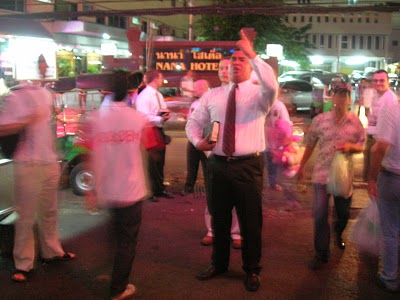 Unfortunate as it is, it seems every religion has its own bunch of extremists. Muslim extremist are most often in the news because of their violence. However there is one thing in common amongst all religious extremists, and that is they all have very far from 20/20 vision including Christian extremists.

Christian extremists are everyplace you look if you care to look. There are what is called Bible Thumpers who stand out by places they deem as sinful and read verses from the Bible. Certainly they are entitled to do this as they only annoy people and not harm them. They have not yet reached the level of the Muslim extremists who kill people who don’t see things their way. The Taliban are in that bunch should you need any points of reference.

As it would be the Bible Thumpers are actually programmed to act as they do. Perhaps the term brainwashed is a better choice of descriptions. This fact can be and has been proven on more than one occasion. If you decide to engage them in conversation to challenge them, you will quickly discover that their answers are preselected and they have been told this is the proper response. So when you start to apply moderate logic and start to dissect their answer proving them beyond a shadow of a doubt to be wrong, they start resorting to responding with passages from the Bible and raising their voices and set about either ignoring you or try to convert you.

By doing that they completely resemble a computer program that has not been programmed with a proper response. Unfortunately this is very true as well as very sad. But amazingly they seem un-detoured and carry on running their primary programming as soon as you depart fully convincing themselves that they have just chased the devil away with verses from the Bible.

But now lets take it a step further and take a look how they are about to be challenged by new Internet laws in Thailand that lean heavy on defamation and personal attacks. Considering that they only see what they choose to see and in the light they also choose, they have a few websites that reflect that very narrow and distorted view of reality. Needless to say it is all about what they see as sins and distort things enough that a court challenge could be forthcoming.

Case in point, a Church group from Connecticut in the US travel to Thailand on a mission a few years back. In the 2 or 3 weeks they spent in Thailand they uncovered countless atrocities related to child prostitution. Amazingly enough expatriates that have lived in Thailand for years in the areas in question and  were totally oblivious to the atrocities. Then suddenly a person who has not yet recovered from jet lag discovers them without any inside connections, it is fairly easy to see the math with this one.

Later when they return to the states they ran their story in the local news. As it would be the publication  was one you could comment on. And comments there were by plenty of ex-patriots both men and women  who were from Connecticut. They promptly cut what was published to shreds as full of distortions and out and out lies. One example was trying to paint Bangkok’s naughty nightlife areas as sleazy and tucked away in some disgusting corner of the city. The fact is the three main areas being Soi Cowboy, Nana Plaza, and Patpong are in and around the most expensive real estate in all of Thailand surrounded by several Embassies and 5 star hotels.