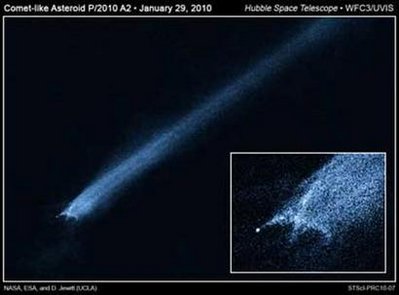 Forget all about global warming for a moment as that is a man made global disaster that our children must endure. What we are talking about is the apparent very recent collision of 2 asteroids that was seen by the Hubble space telescope. Seeing that any collision of this type in space will set asteroids out of orbit, the odds something big will hit the Earth have just gone up.

Per the story below they say that collisions like this are thought to be common, but also never seen before. So it does leave you with the thought of how common is common based on the age of our solar system. Is it every 100 years or every 100 million years.

Also food for thought, Connecting the Dots is just floating the possibility, our logic is based on what scientists have told us and the fact that a collision has just happened. If you look at Hollywood’s depiction of asteroid related disasters that is based on what scientists have said about an asteroid getting knocked out of orbit, Hubble has just provided proof it just happened. And because this event was just discovered it will be a while before we can calculate a trajectory for fragments of this collision.

A mysterious trail of debris spotted in space suggests two asteroids recently slammed into each other.

Though such space rock collisions are thought to be common, direct evidence of the cosmic smashups has never been seen before. New images from NASA’s Hubble Space Telescope, however, have caught the suspected collision on camera.

An X-shaped debris pattern was observed by Hubble on Jan. 25 and 29. The pictures, released today, show a comet-like object, dubbed P/2010 A2, with the X-pattern of filamentary structures near the nucleus.

“This is quite different from the smooth dust envelopes of normal comets,” said study leader David Jewitt of the University of California at Los Angeles. “The filaments are made of dust and gravel, presumably recently thrown out of the nucleus. Some are swept back by radiation pressure from sunlight to create straight dust streaks. Embedded in the filaments are co-moving blobs of dust that likely originated from tiny unseen parent bodies.”

The two asteroids likely smashed into each other with an average impact speed of more than 11,000 miles per hour, or five times faster than a rifle bullet.

The Hubble photos show that the main nucleus of P/2010 A2 lies outside its own halo of dust. This pattern has never been seen before in a comet-like object. The nucleus is estimated to be about 460 feet (140 meters) in diameter.

Scientists think this nucleus is the surviving remnant of the collision, and the tail is the rubble left over from the crash.

“If this interpretation is correct, two small and previously unknown asteroids recently collided, creating a shower of debris that is being swept back into a tail from the collision site by the pressure of sunlight,” Jewitt said.

The Hubble images were captured by its new Wide Field Camera 3, which was installed during the May 2009 space shuttle servicing trip. The camera can spot house-sized fragments at the distance of the asteroid belt.

📂This entry was posted in Space