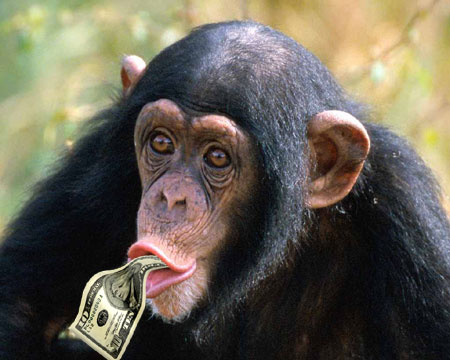 We have all hear the term pay for play. For some it means a fun time (after) in that they have either just receive payment or given payment (now).

To think that this behavior is unique to humans, and we would now be proven wrong. Nature rewards those who can provide.

Chimpanzees enter into “deals” whereby they exchange meat for sex, according to researchers.

Male chimps that are willing to share the proceeds of their hunting expeditions mate twice as often as their more selfish counterparts.

This is a long-term exchange, so males continue to share their catch with females when they are not fertile, copulating with them when they are.

The team describe their findings in the journal PLoS One.

Cristina Gomes and her colleagues, from the Max Planck Institute for Evolutionary Anthropology in Germany, studied chimps in the Tai Forest reserve in Ivory Coast.

She and her team observed the animals as they hunted, and monitored the number of times they copulated.

“What’s amazing is that if a male shares with a particular female, he doubles the number of times he copulates with her, which is likely to increase the probability of fertilising that female.”

Meat is important for the animals’ diet because it is so high in protein. Since female chimps do not usually hunt, “they have a hard time getting it on their own,” explained Dr Gomes.

The “meat for sex hypothesis” had already been proposed to explain why male chimps might share with females.

But previous attempts to record the phenomenon failed, because researchers looked for direct exchanges, where a male shared meat with a fertile female and copulated with her right away.

Dr Gomes’ team took a new approach. In a previous study, she had found that grooming exchange – where the animals take it in turns to groom each other – happens over long periods, she related. “So we thought, why not meat and sex?

“We looked at chimps when they were not in oestrus, this means they don’t have sexual swellings and aren’t copulating.”

Dr Gomes thinks that her findings could even provide clues about human evolution.

She suggests this study could lay the foundations for human studies exploring the link between “good hunting skills and reproductive success”.

“This has got me really interested in humans,” she said. “I’m thinking of moving on to working with hunter-gatherers.”

Michael Gurven from the University of California in Santa Barbara studies human behaviour in communities of hunter-gatherers in South America.

He told BBC News that the direct link between success in hunting and reproduction highlighted by this study could “help in our thinking about humans”.

Professor Gurven, who was not involved in this study, added that the nature of this exchange of meat for sex is “kind of like pair bonding in humans, because it’s long-term.

“This highlights something we haven’t seen in chimps before.”

📂This entry was posted in Nature Sex