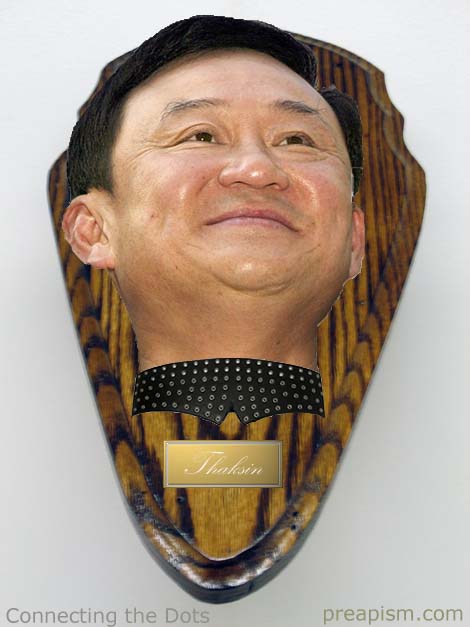 After the landmark court ruling on February 26 on Thaksin Shinawatra that said he was guilty on all counts of manipulation to grow his wealth, Thaksin has become wounded prey in the eyes of prosecutors. Because of that ruling, potential litigations that were never pursued because of lack of supporting evidence, now have more evidence than they could ever have dreamed of.

It is a given Thailand looks to go after Thaksin. His legal protective shell has been cracked wide open and that simply means he is vulnerable to successful legal attacks of both the criminal and civil variety from all over the world. Thaksin has had countless business dealings in a variety of countries with a variety of different companies. Many of those dealings went south as Thaksin increased the power to his greed suction pumps. There were a few very public legal challenges to Thaksin, but it seemed that Thaksin had enough influence over the Thai courts that he would always win.

Thaksin’s assumed standard practice of deception has now been proven to be factual in this court ruling. This also has no doubt provided both desire and motivation to go and dig into Thaksin’s business dealings. This at the very least would prove to be a worthy class assignment in a variety of studies. Students around the world studying criminal investigations into white collar crime have just been given a real life real time project.

There is no real way to come up with a valid estimate but between 50 and 100 cases against Thaksin from around the world would seem to make sense as the what goes around comes around phase of Thaksin’s life begins.

There will be a series of subtle events that Thaksin will start to experience. One of the more significant ones is people will simply not want to do business with him. It will be like jumping into shark infested water with a bleeding friend.

As the civil and criminal cases start to accumulate from places other than Thailand, countries that allow Thaksin in are much more likely to have second thoughts about that particular bit of wisdom. In fact it is fair to assume that every country Thaksin has had dealings in will produce at least one court case against Thaksin.

As these cases mount it will be more difficult for Thaksin to keep a following in Thailand. Sooner or later even the least educated Thai will have to question why Thaksin has so many cases against him from so many places. This all adds urgency for Thaksin to overthrow the Thai government, and it also translates into a significant increase in danger as Thaksin will need to use significant force. Legal approaches and staying within the law for protests are impotent at best at this stage of the game. There is simply too much going the wrong way for Thaksin. Because of that Connecting the Dots places the chance of violence before Songkran (April 13-15) near or at 100%. That violence may be in the form of assassinations or riots or both.