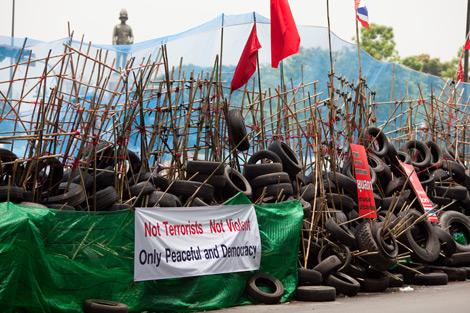 Dozens lie in the street with blood gushing from wounds and others mortally wounded. Some shot in the head while others the victims of grenade attacks. Hundreds hurt and neither side budging from their stance. Each claiming they are on the side of democracy, but only one is right in that claim. The tragic underlying reason for all the death, pain and suffering is one want to be dictator who is simply too impatient to wait 18 months for the next scheduled elections. What that means is people are dying senselessly for something that is automatically coming anyway.

You could compare this to not wanting to wait for the sunrise or sunset and getting people to die to make it happen sooner. You could also compare this to chasing dumb animals into a minefield to clear a safe path. The uncaring for life and the lives of the people who would help this tyrant clearly reflects the true color of how things would be if he ever came to power again. 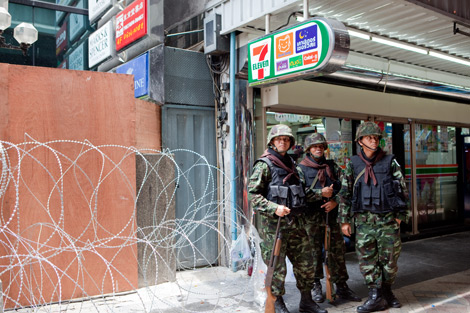 Asking yourself why and how this would happen, you can only conclude that deception was being used to trick these people into thinking that their actions would provide tangible results un-achievable any other way. But for the thousands that were tricked, there is no reward. They only believe there will be a reward, and for that some have died.

When you are faced with the fact that thousands of people fell for this deception, you begin to understand the scope of Thailand’s tragedy. If it can happen once, it most certainly will happen again. The reason it can and will happen again is simply the people lack education to see things themselves. They blindly put their trust into someone who is self serving. 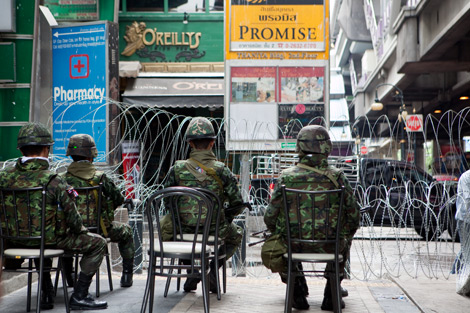 When you sit back and listen to the rhetoric the uneducated Thais are falling for and simply realize inside of 5 seconds that the rhetoric makes absolutely no sense at all, you start to get a feel for the level of education. Beyond the borders of their farms, these undereducated Thais are simply prey for anyone who wants to use them. 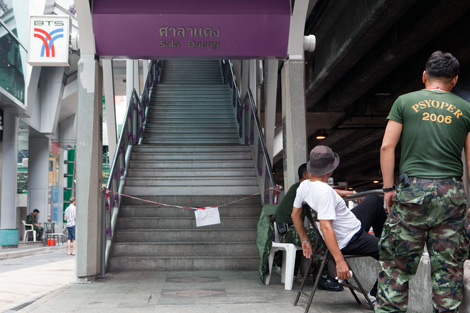 But the tragedy goes deeper still,  The King of Thailand is one of the most respected people on the face of the planet. Over the decades on the throne he has helped the poor Thais improve their lives with many projects in irrigation and made the parched Thai soil fertile and healthy to produce the finest Jasmine rice that is sought around the world. The list goes on and on and the King is honored and respected by all Thais with the highest level of reverence. But yet their education is so poor, they can easily be tricked into becoming anti royal. They think that they are doing the right thing by supporting the want to be dictator who claims respect for the King, but his actions have dispelled that lie. The more educated people have seen this and it is finally being spoken out loud in the hopes of opening the eyes of the undereducated Thais. Unfortunately when they finally realize what they were doing, the loss of face may be unforgivable and lead to yet another tragedy.

It is sad that this tragedy could have been avoided, and each year hundreds of non-Thai teachers see this sad cycle repeat as Thai students that fail get passed ahead leaving them without adequate tools for a prosperous life and logical decision making. For whatever reason it seems that many Thais are just voting cattle to be used by politicians.

The way the school system is structured, the temptation to fail is immense and many Thais fall prey to this trap. Very simply all a Thai needs to do is physically attend class. They can sleep in class or amuse themselves with other things. Passing is guaranteed with a padded passing grade. Once this cycle starts they fall further behind unable to comprehend the lessons because they failed the prerequisite lessons but were passed ahead.

It is Thai politicians that control this school process that is one of the worst in the world. Efforts by foreign teachers to change the system have fallen on deaf ears because where the teachers see people, politicians see easy votes, and that is the fuel that fed Thailand’s 18 month National tragedy.

Because of this tragedy, it now focuses the worlds attention on Thailand, and the reflection is far from flattering. There may be some face saved by politicians in that the want to be dictator and tyrant was at the helm for 6 years, so it could be said he was tending to his voting cattle. But without changes, that slim chance of face saving will be lost as the next 18 month tragedy waits to happen.

« Red Shirts trapped by greed Connecting the Dots 2 years on »