Year of the Oil 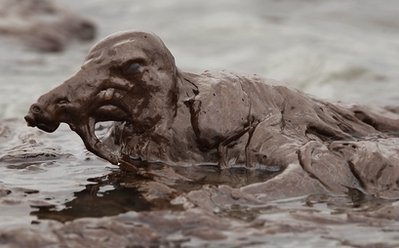 Move over year of the Tiger, move over Rabbit, Dragon and Snake as well. This is the year of the Oil complements of BP in the Gulf of Mexico, and it is here to stay much longer than any of your in-laws ever did.

This is a big spill, and it will not be long before someone says this is the worst ever anywhere. Where spills of the past were finite, this one has the potential to be infinite and flowing for decades. This is all thanks to some ingenues idiots with decision making authority who put a time table ahead of everything else including proven and obviously necessary safety precautions.

Those who know what is coming are the ones with the most anxiety. The fairly recent memorable major spill that was smaller than this BP spill in the Gulf of Mexico was the Exxon Valdez spill in Prince William Sound that happened in 1989. The effects of that spill are still being felt over 20 years later. The major difference was that spill was more or less isolated from big human populations effecting the environment and wildlife much more than humans.

This BP spill will impact humans as much as the wildlife and ecosystem. The immediate region has a higher population than the whole of Alaska. For lack of a better description this is a major wound roughly equal to getting the region’s throat cut.

The entire area thrives on the bounty of the sea as well as tourist trade. Both will come to an end or be on life support ready for last rights at the very least. The level of this man-made tragedy can not be under said. With a high performance hurricane season predicted and the potential of storm surges pushing the oil well inland, the entire area may become sickening, toxic and unable to be cleaned. If that happens then the choices are few and all extremely negative.

The problem at the moment seems to be some bickering at what is best or what will work for cleaning up what is already spilled. Connecting the Dots suggest the anti idiot proof approach and do them all. It will end the argument as well as attack the oil spill. If it was not so serious it would actually be a bit funny and would make a good skit for “Saturday Night Live.”

It is impossible to express the loss a person would feel who sees the end of generations of family business and livelihood rolling in with the wind and the tide. The area survived hurricane Katrina, but it looks not to survive the ingenues idiots with decision making authority who work for BP.