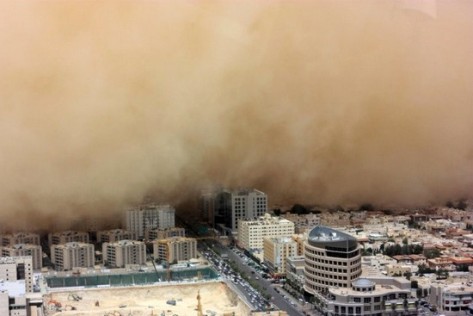 The one thing constant about global warming is our inability to nail down when things will start to get real bad. Things are happening far sooner than we could ever have imagined or predicted. So looking at the major weather swings that have started this year, it may well be that the start of the major disasters has arrived.

Ask yourself when was the last time you heard or read about 1 million people being displaced by a single weather related event, and you will quickly come up with the answer of never. But the fact of the matter that is what is going on in China. Ask yourself when have the extreme conditions we are seeing happened in the past, and once again you will be forced to conclude that similar events were few and far between and not regular as like today’s world. Just looking at this and it is easy to conclude the war on humans has probably begun.

The phrase tipping point has been used in describing various events in nature that have defined the balance being unfavorable to sustain the previous condition. For example soon the Arctic ocean will be ice free during certain times of the year. With each passing year the number of ice free days will grow. Prior to the tipping point the Arctic ocean was never ice free and was the habitat of Polar bears. Soon the only Polar bears will be the ones in captivity. They will be forced to hunt land prey for food changing their habitat, and that means humans are on the menu. When that happens out come the guns and you do not need to be told where that will lead to.

So as nature’s war on humans seems to have started, now it is nature’s turn to bring about a tipping point with humans. That tipping point will be when humans can no longer keep up with the onslaught of weather extremes. Governments will be out of cash and or rebuilding time will take longer than the time it takes to be destroyed again. There will be the tipping point of when there will no longer be enough food or water to feed everyone on the planet. That is the most common event of nature observed regularly.

When ever there is some sort of overpopulation, nature starves them and the weakest die and the strongest survive. We call it survival of the fittest and it was part of Darwin’s theory. Simply it is nature pruning. This has never happened to humans in recorded history where weather related events were significant enough to threaten the human species as a whole. There has been bouts with various viruses like a flu pandemic, and for the most part they did reduce the population a few fractions of a percent. But now we are facing a possible population reduction of 10% to 30%. Only numbers that big will offset the damage we are doing to the planet.

The reason for that is the people that are doing the least harm to the planet will most likely be the first to die. So nature will continue to dig deeper into the population until the poisoning of the planet stops. When you look at the charts of what country is doing what to the planet, you can eliminate 10% to 30% of the people before you start to get to the significant damage makers. This was a major sticking point at the last global warming summit.

So as it seems now the war with nature has started, and this is not a war we can win. Very simply we must surrender and that means pull the plug on whatever is contributing to global warming. If you care to look at it another way, we have been committing a crime, and now we must pay the price for that crime. In this case nature is the judge, the jury, and the executioner, and we are clearly guilty. If the war has started, then there will be no probation or consideration that we are working at changing our ways. It is too late for that. What has been a crime against the planet, has now expanded to be a crime against humanity as well.