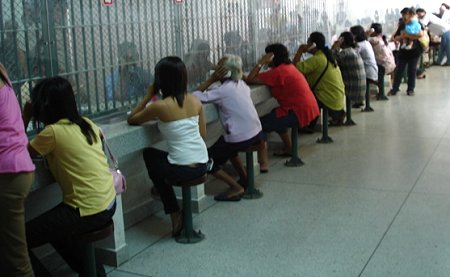 This is just one of those things that makes you want to do a double take and perhaps a triple take. No matter how you cut it or try to dress it up with brightly colored advertisements, shopping for political candidates in a prison or a jail simply does not come across in a positive way. Putting bad politicians in jail is the norm in most countries. But in Thailand pulling people from jail to run in an election is just down right unbelievable. Some may compare it to drinking water from a toilet.

Just the fact that the PTP are actually going through with this, not only damages the face of the PTP, to the casual observer it casts a very negative light on Thailand and Thais. This very simply and clearly implies the ‘Backwards’ brand with knowing little more. This type of backwards thing seemed to have disappeared once Prime Minister Abhisit came to power. When the Pro Thaksin people were in power, the backwards thing was a near daily occurrence.

Now Connecting the Dots does not say this can be all bad. If you stop and think about it, several people that were jailed rose to be highly respected once they were released. With that said, the name Nelson Mandela comes to mind. The one difference is the reason he was jailed. Nelson Mandela did not have involvement in burning a city or terrorism, for him it was political repression because of the color of his skin. His cause was accepted by the people of the world. In the situation of being accused of terrorism like the PTP potential candidate sends the completely opposite message. The PTP candidate is no Nelson Mandela.

This also says that either the PTP just does not get it, or they simply do not care where they get their candidates from. More than likely this is just one of those slow learner things. The second thing is getting someone from jail or prison leaves that person at a handicap. In the event that person was elected, they would be spending much of their time getting their defense ready for court, and that would take from their ability to properly represent their constituency.

Connecting the Dots was going to let this slide by, but after several emails by readers wondering about our take, we decided a satirical entry was called for. After all how often does this sort of thing happen. In fact it is difficult not to poke fun at it. One can only Imagine what Jay Leno or David Letterman would do with this if it happened in the states.

One thing that has been mentioned is pressure on the courts to release the PTP candidate. But Connecting the Dots simply understands that people incarcerated want a lot of things, and in this case wanting to run for office has nothing to do with the reason they are in jail. So because of that, the reason is not relevant and it should not be considered by the court. Imagine if they would petition the court for bail because they did not like the food in jail or wanted to spend a few weeks on a beach holiday shagging their girlfriend. But then again we could be wrong on this and that would really do some serious damage to Thailand’s appearance if he was granted bail. If the Thais can not sort this simple basic concept out, how will they ever manage a nuclear power plant without some sort of major ecological disaster.

This most certainly qualifies for popcorn and butter as well as a new category called ‘Appearance is everything’. We can hardly wait to see what else we will find for that new category as time ticks by.