The magic bullet once thought a blank 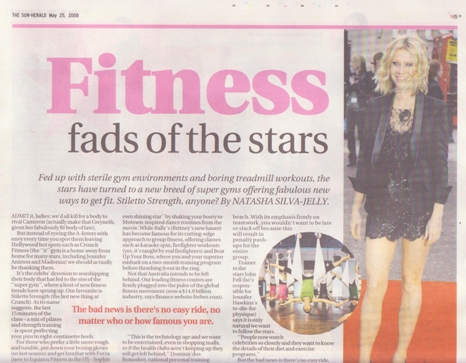 It is interesting how us humans follow the trends of celebrities. We buy the brand names they buy, we dress and change our appearance to mimic them and we even seek out the same treatments or procedures they have used be it some form of vanity surgery or the type of therapy they have used. The latest trend by the celebrities has been to use Hypnotherapy for a variety of things that go well beyond giving up smoking.

Connecting the Dots has two things that we do well. We show how things that seem small and independent are actually part of a bigger picture. We also have an impressive track record about making predictions. Our successful prediction record floats between 75% and 80%. We have never been below or above those numbers. With that said, our next prediction is now that hypnotherapy has been accepted into the mainstream as a viable and legitimate form of therapy, we see it simply taking off and very possibly becoming the therapy of choice.

The days of thinking hypnosis was a parlor trick and smoke and mirrors is fading away now that people are seeing there are 2 types of hypnosis. One is for entertainment, the other is for therapy. With celebrities getting on board, people are just now opening their eyes to just how powerful, fast and ultimately how much less expensive it is when compared to the more traditional forms of therapy. Simply it cost less because the same results are achieved in 1/4 of the time and 1/4 of the number of visits needed. Imagine gong to a psychologist every week for 6 months paying $100.00 per visit. Then getting the same outcome by seeing a clinical hypnotherapist for 6 weeks. Most people can conclude through their wallet that spending $600.00 is better than spending $2400.00 for the same results. Spending 1/4 of what you would have spent is a very powerful suggestion itself, in fact it becomes a no brainer.

The only thing that stopped people before was they did not know there were 2 types of hypnosis. They only saw the entertainment version simply because it is in the public’s eye. The therapy version had to be hunted down the same way as hunting down any other therapy be it a psychiatrist or a health spa. In the past that involved the Yellow pages in the phone book, but today you can just Google.

So with celebrities making use of hypnotherapy some may say this may just be a passing fad. In most cases that may be true. However in this case once the general public gets a good taste of just what hypnotherapy can do, it will not be just a passing fad. Although it may have started as a fad, the benefits will clearly make it a staple.

When you come right down to it, many of the problems people have are simply in their subconscious mind. Short of some genuine physical problem that is clearly visible to the human eye with medical exams and medical tests, hypnotherapy can effectively deal with the rest. For men it can be things like premature ejaculation and erectile dysfunction. For women it can be that elusive female Viagra A.K.A. ‘The Pink Pill’ because female sexual arousal and desire is more emotional than the male’s physical arousal. The brain still remains the primary sex organ in both genders.

As hypnotherapy is an ongoing and growing therapy, more and more applications are being discovered. Perhaps one of the most significant ones happened right in Bangkok with an American clinical hypnotherapist. That was the discovery that hypnotherapy had the ability to significantly reduce the recovery time for stroke victims. Apparently hypnotherapy has the ability to accelerate the growth of new synaptic connections repairing or bypassing the damaged part of the brain. Once that cutting edge groundwork was discovered,  it started working its way into one of the therapy options hypnotherapy can do. Once a clinical hypnotherapist is properly trained in this groundbreaking therapy, the door is opened for stroke victims in that part of the world. More here.

So with just that one example of what hypnotherapy can do, it is difficult to discard it as a bunch of smoke and mirrors. But it does not stop there. Hypnotherapy for the most part seems to add octane to other therapies as well. Study after study clearly puts hypnotherapy on the map as a powerful form of therapy that should not be discarded. In fact there are so many things hypnotherapy has demonstrated an ability in, it is probably best just to contact a qualified clinical hypnotherapist and see if it will work on the problem in mind (no pun intended). If the celebrities have latched on to the idea that hypnotherapy works, then it can’t be all bad.

Seeing that there has been a long overdue major rewrite of health care in the USA, hypnotherapy is likely to have more coverage than it had in the past. With that hypnotherapy also becomes an added option over a bottle full of psychiatric drugs that does nothing except hide the underlying problem that eventually can lead to endless use. So again this becomes a no brainer to get things sorted out in a few months with a hypnotherapist vs life long visits to the pharmacy to create a private little vanilla world that eats away at a persons sex life.

If you can not find a hypnotherapist near you, the American clinical hypnotherapist in Bangkok has said that he gets people from all over the globe coming to see him. Many people want to kill 2 birds with one stone. They visit Thailand for some well deserved holiday and down time and at the same time see him for therapy. He also gets people who are taking advantage of Thailand’s inexpensive quality medical facilities for surgery be it for necessity or vanity. He imagines other hypnotherapist that practice near holiday destinations around the world experience the same inflow. More here.