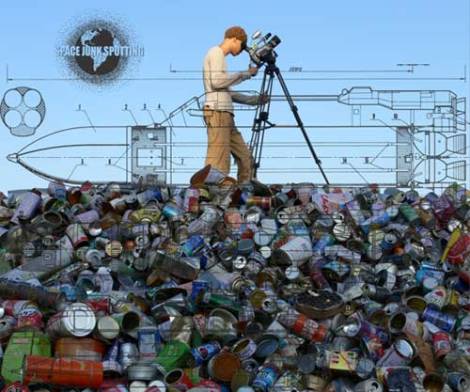 Have some money and looking for a chance to get the same name branding as Hubble? How does picking up the trash is space sound to you!

If you stop and think about it, from the moment Sputnik was placed in orbit around the Earth, that wonderfully clear sky started becoming a dumping ground. That was in 1957, now fifty plus years later there are literally thousands of things in orbit that simply are hazzards to the things that we want in orbit. They range from lost tools to lost gloves to final stages of rockets.

There has already been a collision between an active communication satellite and space junk that simply made things worse. The fact that near misses are news worthy now suggests the scope of this problem.

So here is the money making task, and perhaps someone is already on the case. Develop an unmanned satellite who’s only mission is to clean up the space junk. The task is easy if you think about it. All that needs to be done is nudge the space junk into a decaying orbit. The small stuff that will burn up on reentry is of no consequence. The big stuff that will make it back to earth that has no hazardous material like nuclear fuel can be aimed at any ocean with little consequence.

So now you ask who would be your customers. Well first off considering the cost of getting things into orbit, your customers are the companies or agencies that want to keep their stuff in orbit. So for each bit of junk sent to its demise in the atmosphere, how does $50,000 to $300,000 sound. Considering the amount of junk there is, Bill Gates would be a distant second on the latest Forbes list of richest people. Not a bad take for a trash collector in anyone’s book.

A head-on collision was averted between a spent upper stage from a Chinese rocket and the European Space Agency’s (ESA) huge Envisat Earth remote-sensing spacecraft.

Space junk tracking information supplied by the U.S. military, as well as confirming German radar data, showed that the two space objects would speed by each other at a nail-biting distance of roughly 160 feet (50 meters).

ESA’s Envisat tips the scales at 8 tons, with China’s discarded rocket body weighing some 3.8 tons. A couple of tweaks of maneuvering propellant were used to nudge the large ESA spacecraft to a more comfortable miss distance.

But what if the two objects had tangled?

Such a space collision would have caused mayhem in the heavens, adding clutter to an orbit altitude where there are big problems already, said Heiner Klinkrad, head of the European Space Agency’s Space Debris Office in Darmstadt, Germany.

It turns out, Klinkrad told SPACE.com, that 50 percent of all the close conjunctions that Envisat faces are due to the lethal leftovers from China’s January 2007 anti-satellite test, as well as chunks of junk resulting from last year’s smashup between an active U.S. Iridium satellite and a defunct Russian Cosmos spacecraft.

Significant progress has been made by the U.S. and the international aerospace communities in recognizing the hazards of orbital debris, reported Nicholas Johnson, chief scientist for orbital debris at the NASA Johnson Space Center in Houston, Texas.

Johnson added that steps are being taken to reduce or eliminate the potential for the creation of new debris. However, “the future environment is expected to worsen without additional corrective measures,” he noted.

The worst thing that could happen, according to ESA’s Klinkrad, is the International Space Station (ISS) receiving a fatal hit. The space station is currently home to five astronauts representing the U.S., Russia and Japan.

“A penetrating object hitting the ISS, and possibly causing a casualty onboard . . . I think that would be the most dramatic case we could have,” Klinkrad suggested. Such an incident might turn public opinion against human spaceflight, he said.

Collaboration on the increase

One bit of good news in all this orbital riff-raff.

Due to last year’s satellite crash between the Iridium and Cosmos spacecraft, Johnson explained that the Joint Space Operations Center (JSpOC) of the U.S. Strategic Command now conducts conjunction assessments for all operational spacecraft in Earth orbit, regardless of ownership nationality.

“To be honest, a year ago, we couldn’t even have hoped to have done this,” Johnson told SPACE.com.

“It’s really a consequence of the collision last year. People have been talking about this for years. But now we’ve made the commitment . . . that this is something that needs to be done and can be done relatively easily,” Johnson said.

Klinkrad concurred. “The collaboration is getting even closer now,” he said.

Playing dodge ball with high-speed space debris is one tactic. But there is also a growing interest in removing the most troublesome objects — perhaps an annual quota of some sort.

Targeted would be specific inclination bands and altitude regimes, Klinkrad said. But prior to implementing debris remediation measures on a global scale, technical, operational, legal and economic problems must be overcome.

Klinkrad and NASA’s Johnson provided a wearisome appraisal of the future.

Even with an immediate halt of launch activities, spacefaring nations will be dealing with an unstable low-Earth orbit environment in some altitude and inclination bands. This would be a consequence of about 20 catastrophic collisions within the next 200 years, the two orbital debris experts explained.

Some orbit altitudes already have critical mass concentrations that will trigger “collisional cascading” within a few decades, unless debris environment remediation measures are introduced.

The idea of debris creating debris was put in motion by Donald Kessler, along with fellow NASA researcher, Burton Cour-Palais, back in 1978.

Now, decades later, that prophecy has been dubbed the Kessler Syndrome.

Kessler told SPACE.com that the disorder fits into much more complex natural laws that include the evolution of the solar system, as well as meteoroids, meteorites, and climate-changing asteroids.

Kessler is now an orbital debris and meteoroid consultant in Asheville, North Carolina.

“There is nothing complex about what is called the ‘Kessler Syndrome’ . . . it is just the way nature may have converted a disorderly group of orbiting rocks into an orderly solar system . . . although nature reminds us with a large asteroid or comet collision every few million years that it isn’t quite finished yet.

“In the case of orbital debris, this collision process is just starting,” Kessler explained.

Consequently, nobody should be surprised that as orbital debris models became more complex — and as more data is obtained — the same conclusion holds, Kessler said.

“The future debris environment will be dominated by fragments resulting from random collisions between objects in orbit, and that environment will continue to increase, even if we do not launch any new objects into orbit,” Kessler concluded.

📂This entry was posted in Space Technology Work 📎and tagged money